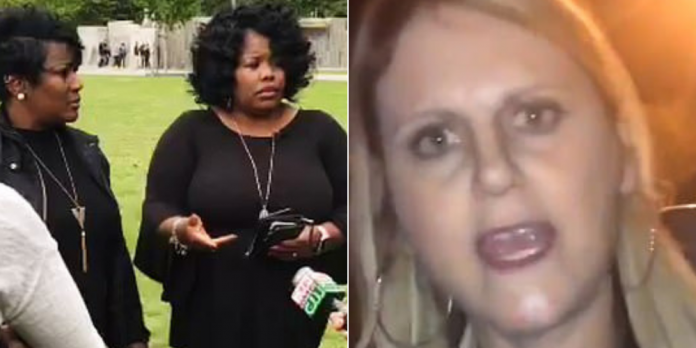 Susan Westwood was fired from her job and faces criminal charges after boasting about her income and threatening the African-American sisters at a Charlotte, North Carolina apartment complex on Oct. 19, WJZY-TV reported.

The video of the encounter when viral after one of the Black women posted it to her Facebook page on Friday. It shows Westwood approaching the women who were reportedly waiting for AAA to service their disabled vehicle in the apartment complex parking lot.

Westwood, 51, begins questioning whether they live at the complex and demanded to know why they are “congregating” in the parking lot. One of the women was a tenant at the apartment building, which Westwood apparently doubted that a Black person could afford. She brags about earning $125,000 a year, adding that she’s “white” and “hot.”

After the two women walk away, Westwood screams, “Do I need to bring out my concealed weapon, too? This is North Carolina by the way.”

The Black women responded to Westwood’s abuse with dignity, according to the Daily Mail. They calmly asked Westwood to leave them alone and called 911 to report the incident.

“The incident recorded in Charlotte is a blatant violation of Charter’s code of conduct and clearly disregards the company’s commitment to inclusion and respectful behavior,” a statement from Spectrum said.