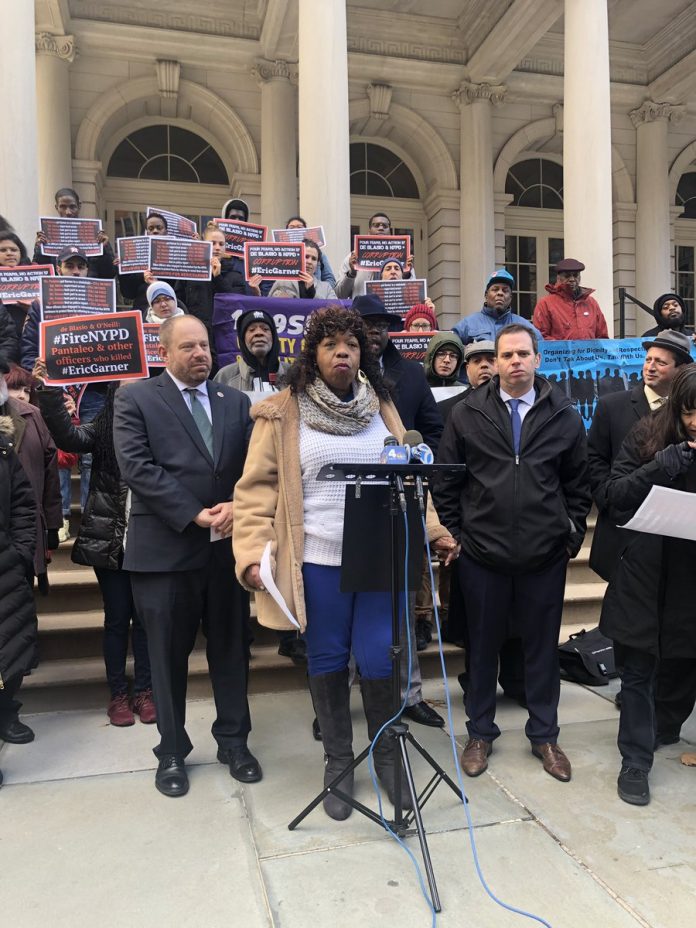 Eric Garner‘s mother took to the steps of City Hall on Tuesday to repeat her calls for criminal charges against the New York Police Department (NYPD) police officer who choked her son to death more than four years ago in Staten Island. But unlike her previous demands for justice, this one will “probably” result in an indictment of Officer Daniel Pantaleo, according to a new interview with an ex-NYPD official.

“We know as we sit here today that the career prosecutors and FBI agents in the Civil Rights Division in Washington have concluded their factual investigation,” Larry Byrne, the former head of the NYPD’s Legal Bureau, told NY 1’s Dean Meminger. “That means they have interviewed all of the witnesses, they reviewed all of the evidence. They have reviewed the video tape that we have all seen many, many times. And they have made a recommendation to the front office.”

The NYPD’s Legal Bureau “provides assistance to law enforcement personnel regarding department legal matters,” including assisting “members of the service in interpreting and enforcing state, federal, and local laws,” according to New York City’s official website.

“My suspicion, based on my seven years as a federal criminal prosecutor, is that they have probably recommended an indictment,” Byrne said.

If that happens, it would come slightly more than four years to the day after a Staten Island grand jury declined to indictPantaleo.

New York City Mayor Bill de Blasio assured Carr this past summer that her son “did not die in vain,” but he has come under heavy scrutiny for not doing more to bring Pantaleo to justice. De Blasio’s vow came one day after Carr called out the mayor for what she called “political procrastination.”

On Tuesday afternoon, she continued to point toward the mayor and expressed outrage that Pantaleo has continued to be gainfully employed by the NYPD while on desk duty earning what reports have said is at least $120,000 a year.

Garner was approached by undercover NYPD officers on July 17, 2014, for the alleged offense of selling untaxed loose cigarettes. When officers failed at handcuffing him for the nonviolent misdemeanor, Pantaleo employed an illegal chokehold that ultimately killed Garner. The entire deadly episode was captured on cellphone video and filmed by a bystander. Garner’s final words “I can’t breathe” — became a rallying call for social justice advocates who saw his death as a murder.

The pending decision from the Department of Justice will either be the end of the case or the start of legal proceedings against Pantaleo, Byrne said.