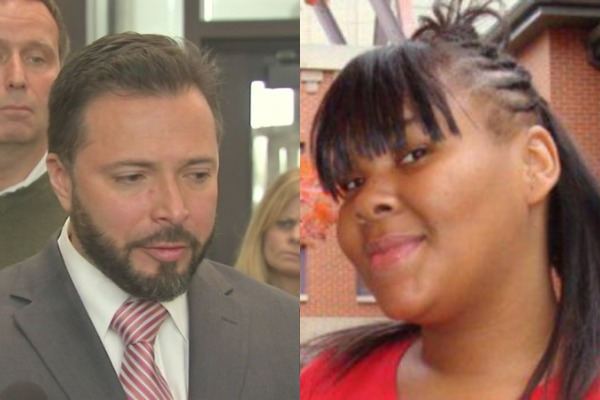 The attorney for a former Chicago officer who quit the force after fatally shooting innocent bystander Rekia Boyd is now fighting to give his client the “fresh start he deserves.”

Chicago prosecutors aren’t here for it, however, and neither is the victim’s family.

Dante Servin escaped an involuntary manslaughter conviction after judge acquitted him in a bench trial, arguing the then-officer should have been charged with murder in Boyd’s 2012 killing, the Chicago Tribune reported. Since then, Servin’s lawyer says his client been “tormented” and wants all evidence of the criminal case against him erased from public record.

Matt Fakhoury, his attorney, claims the 51-year-old has struggled to find a steady job and now suffers from post-traumatic stress disorder, anxiety and “extreme depression.” Expungement, he said, would be an important step in helping the disgraced cop rebuild his life after fallout over the shooting.

“We’re trying to get him the fresh start he deserves,” said Fakhoury, according to the newspaper.

If successful, evidence of prior charges against Servin would vanish from both public view and police databases, making it possible for him to enter the law enforcement field again.

Efforts to have Servin’s record erased have drawn strong opposition from his Chicago prosecutors, who are fighting the move. Boyd’s relatives have also spoken out in anger and disgust

“I don’t believe he can be trusted,” the victim’s brother, Martinez Sutton, said of Servin. “I’m still perturbed that this guy is still out here and he’s able to roam around like this.”

“If a judge is stating that, if anything, this case should have been charged as murder, then why should he be able to live a free and happy life and his so-called blemishes erased?” he added.

Servin shot and killed Boyd in March 2012 after firing a round out of his car window. The then-officer, who was off-duty and in plainclothes, was driving near Douglas Park on the Chicago’s West side when he got into a tiff with a group of teens about their noisiness. Boyd and her friends were standing and talking nearby.

When one of the teens suddenly approached Servin’s car, the officer said he thought the youth was armed, prompting him to pull his gun and fire a shot out of the car window. The bullet grazed the teen but struck Boyd, 22, who was talking and laughing with friends just feet away.

She was struck in the back of the head and succumbed to her injuries the next day.

At trial, Servin said he opened fire because he thought one of Boyd’s friends had a gun; that “gun” turned out to be a cellphone.

Outrage ensued after the embattled officer was allowed to resign from Chicago PD just days before an evidentiary hearing with the city’s police board, which was mulling his termination.

Because he quit, Servin was allowed to keep his $57,000-a-year cop pension. Now, his lawyer says the allowance simply isn’t cutting it.

He has the right to seek a job “without the (criminal) case affecting him,” Fakhoury said of Servin. “He should be able to be gainfully employed and support his family.”

Boyd’s brother said he was perturbed by the idea of Servin joining another police force and said whatever pain the ex-cop has suffered pales in comparison to what he and his family have gone through.

“He suffered for the past few years when we have to suffer for the rest of our lives,” Sutton told the Tribune. “It seems like it just happened yesterday.”

A hearing on Servin’s expungement has been scheduled for next month.