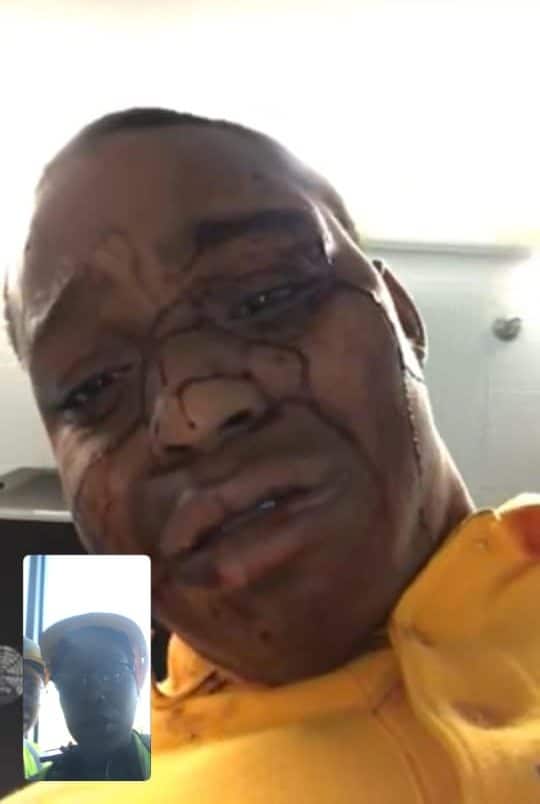 Violent protests erupted outside L.W. Higgins High Schoool in the New Orleans suburb of Marrero, La., on Friday in response to shocking video of an 18-year-old student being brutally beaten by a Jefferson Parish Sheriff’s deputy.

Now, the teen’s family is demanding answers from school leaders.

According to local station WWL-TV, students gathered at the school to voice their frustration over the administration’s handling of the incident involving senior Jami Coston, who called his mother via FaceTime after the alleged Jan. 24 assault.

“I’ve never seen a face dripping like that,” Dasuqua Coston, told the station, describing how her son’s face was swollen and covered in blood.” It looked like it was coming mostly from his eye. His lip look busted.”

“[His] eye is bust, blood is leaked all over his school shirt … [it’s] leaking everywhere,” she added.

The incident unfolded Thursday when officials said Coston caused a disruption in class after a teacher accused him of having cigarettes “because he smelled like it.” That’s when a dean at the school summoned a school resource officer (SRO) to search the Black teen, who sheriff’s office officials described as “extremely angry and profane.”

As the deputy and an administrator approached Coston outside the main administration building, the student allegedly resisted being handcuffed and refused to comply with the deputy’s commands. That’s when JPSO said the deputy “escorted him to the ground …”

“Jamiah said he took off his jacket and said ‘oh b—h,  you wanna fight?” Dasuqua recalled. “Once (the deputy) got to Jamiah, that’s when the slamming, the putting the arms behind the back … and he said he was screaming.”

A witness captured part on the incident on video, which was widely circulated among students on social media. In the clip, a man is seen falling on top of the teen in a dark breezeway.

JPSO officials said the deputy suffered scrapes to his right knee and right hand during the scuffle while Coston suffered a minor cut near his left eye. After the deputy managed to secure the teenager, he was reportedly taken to the deputy’s office to do the necessary paperwork for his arrest.

Once inside the office, the deputy claimed Coston tried to pull away from him and he was again forced to tackle the teen to the ground in an effort to subdue him.

“While in handcuffs, Jami cussed at the officer at which time he was taken against his will into a room with no camera no witnesses,” the group wrote in a Facebook post. “Jami was so badly brutalized that behind closed doors, students could hear his loud cry of pain. Rather than intervene, teachers refused allow students to support their classmate. They … heard him getting beat up by police over an unproven accusation of smelling like cigarettes.”

The organization claims Coston wasn’t allowed to file his own incident report and that his family wasn’t notified of what happened until he called his mother on FaceTime.

The teen was arrested and booked into the Jefferson Parish Correctional Center on charges of resisting an officer, battery on a police officer and interfering with an educational facility, FOX 8 reported.

The incident spurred a student-led protest at the school on Friday, during which two fights broke out and one student was arrested, authorities said. The teen’s family, who said they plan to hire an attorney, said Coston is set to graduate in May. Yet now, “the school is trying to [expel] him for something they told us they knew nothing about,” a Facebook post by Coston’s sister, Mari Coston, alleges.

“LW HIGGINS HIGH SCHOOL AND OFFICER GOFFIE TREATED BY BROTHER LIKE A CRIMINAL OR SOME TYPE OF ANIMAL AND WE WILL NOT STAND FOR IT!!!” she wrote.