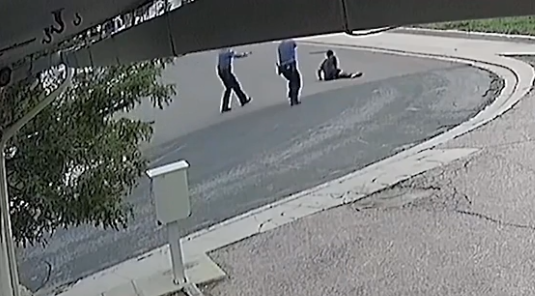 Attorneys for the family of a young Black man shot and killed by Colorado officers earlier this month are now calling for an independent investigation into the incident.

Surveillance video obtained by The Gazette shows 19-year-old De’Von Bailey fleeing police, then falling to the ground before being handcuffed by officer. Colorado Springs police said at least one of the officers fired a shot at Bailey, whom they suspected in a robbery, when he reached for a weapon during the chase on August 3.

Despite a third officer’s efforts to save his life, Bailey died from his injuries.

The shooting is now under investigation by the El Paso County Sheriff’s Office and will be subject to a later review by the district attorney’s office, according to The Associated Press. However, attorneys for Bailey’s family argued there are “too many conflicts” in the authorities’ investigation and have instead suggested a special prosecutor be appointed to refer the case to a grand jury.

“An independent and impartial special prosecutor should be given the important responsibility of bringing charges against the officers involved in this tragedy,” lawyers Darold Killmer and Mari Newman said in a statement Monday.

Moreover, the lawyers said the young man’s family is demanding that all footage from the officers’ body-worn cameras and dashboard cameras be released.

“We want to make sure that it’s all the information, not just what the police think supports their side of things,” Killmer added.

“We know that there can be frustration with the time this takes, but we cannot compromise the investigation by failing to spend the appropriate time gathering the facts; that would serve no one,” Suthers said.

Footage from the incident, taken from a surveillance cameras at a nearby apartment complex, shows the officers, both of whom are white, chasing Bailey with their weapons drawn. Police were responding to reports of an armed robbery on East Fountain Boulevard when they encountered the teen and another man, one of whom they say reached for gun. That’s when one of the officers opened fire.

Witnesses reported hearing multiple shots, at least seven during the incident, according to The Gazette. Rev. Promise Lee, a pastor aiding Bailey’s family, said he observed gunshot wounds to the young man’s body at a funeral home.

“Regardless of how many times you look at that video, it’s undeniable that this shooting was excessive and uncalled for,” he said.

On Friday, the city and Colorado Springs Police Department issued a joint statement promising to release police body camera video from the incident sometime this week. Officials said the video showing “the moments leading up to, including and immediately following the shooting” will be made public as soon as the department is done with its investigation.

“As the releasing authority, CSPD has committed to releasing the footage only at such a time when it will not jeopardize or compromise the investigative or judicial process,” the statement read.

The case will then be turned over to the DA’s office, which will decide whether to bring charges against the two officers involved.