DefenderNetwork.com
Home LEAD STORY Family wants to know why their 17-year-old son was brutally beaten by... 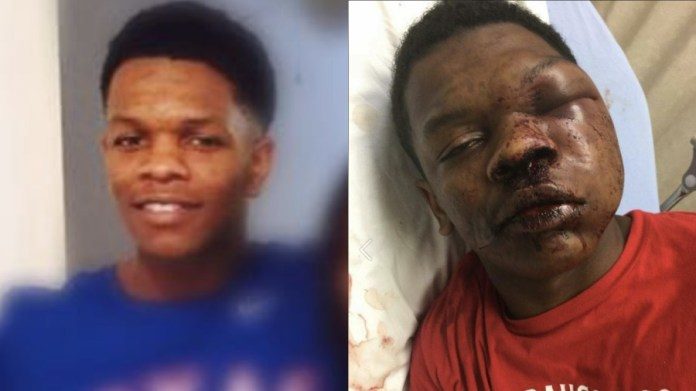 The images are hard to stomach. A swollen face. Cracked eye socket.  And bloodied skin to the point of non-recognition.

The family of a 17-year-old boy from Alabama is looking for answers after their son was brutally beaten by police.

Ulysses Wilkerson’s mother posted the graphic images of the aftermath of his encounter with officers from the Troy Police Department. Her post has been shared 80,000 times, with many expressing outrage over his condition.

“He had trauma to the brain, swelling on the brain, and a cracked eye socket in three different places,” said Ulysses Wilkerson Jr., Ulysses’ father.

“From all over the world, people are commenting they want justice,” he added.

Wilkerson’s father also said that while police had handcuffed his son, the charges against him were dropped.

“They had him handcuffed when we got in there they said he was charged with obstruction of justice the ambulance came to take him to UAB they took the handcuffs off and dropped the charges on him,” he said.

“I hope they are not beating him”

Wilkerson reportedly encountered the police after walking around the corner of a building in Troy, Alabama. When the officers tried to speak to him, he ran, which prompted a foot chase.

One witness said that she saw officers surrounding an apparently unconscious Wilkerson.

“You could see the swelling of his face you could tell he had a lot of bleeding. He looked like he was passed out or maybe in and out of consciousness,” said Brittany Patterson.

She added that the first thought in her mind was, “I hope they are not beating him.”

The Alabama State Bureau of Investigation is now looking into the matter. They declined to provide too many details because Wilkerson is a minor. However, they acknowledged they’d been asked to investigate.

A statement from the SBI said in part, “On Sunday, December 23, 2017, Troy (Alabama) Police Officers arrested a 17-year-old juvenile in the area of Madison Street at approximately 11:52 PM.  During the arrest, the juvenile was injured, and was transported directly to Troy Regional Medical Center.”

“The Juvenile was later transported to University of Alabama Medical Center in Birmingham, and subsequently released.  City of Troy Police Chief Randall Barr requested the Alabama State Bureau of Investigation (SBI) conduct an independent investigation into the use of force by his officers.”