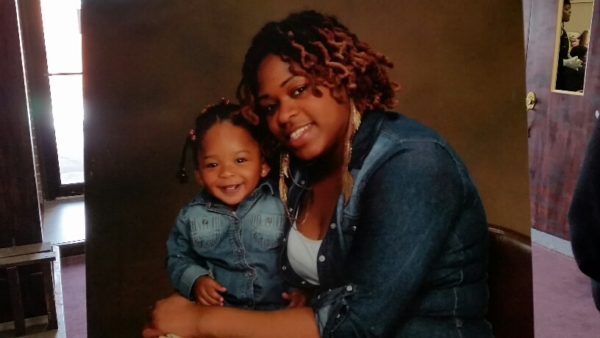 In the months after Daron Boswell-Johnson learned he was the father of a 2-year-old girl, he took to the Internet for advice.

“How can I stop child support?” he tapped into his phone in late 2015.

“How does the court know if child support is not paid?” he typed shortly after.

Weeks later, after $600 a month began being garnished from his paychecks, his daughter Chloe Davis-Green and the girl’s mother, NeShante Davis, were dead. Daron Boswell-Johnson escorted by detectives after his arrest in 2016. (Prince George’s County police )

It appeared, according to prosecutors, that Boswell-Johnson’s answer to his child support problems was executing the mother and daughter in the early morning of Feb. 2, 2016.

A Prince George’s County jury on Tuesday agreed, convicting Boswell-Johnson of two counts of murder in the double killing.

With no gun and no DNA evidence linking Boswell-Johnson to the murder scene, prosecutors relied on his videotaped confession to detectives, cellphone records, surveillance videos and notes he wrote to his loved ones before heading to jail.

“I know I failed you as a son,” he told his mother.

“I’m not the monster they are making me seem to be,” he wrote to the mother of his other two children. “I was lying to them until they bring me your picture,” he told his girlfriend.

During the trial, which lasted more than a week, Boswell-Johnson’s attorney, Antoini M. Jones, contended the confession from his client was coerced. Jones also said Davis and Boswell-Johnson were still communicating and had a good relationship at the time.

“There was not a hint of dissension between the two parties,” Jones said. “They joked and talked about their daughter, who my client referred to as ‘baby girl.’ ”

Davis was a teacher at Bradbury Heights Elementary School in Capitol Heights. She and her daughter were killed outside their Fort Washington home in one of many high-profile domestic homicides that dominated headlines in Prince George’s County in 2016.

Boswell-Johnson at first told officials he was sleeping at the time of the shooting, according to court testimony. But after he was confronted with surveillance video showing his SUV rolling out of his apartment complex that morning, he told detectives he simply went to his daughter’s townhouse to see her off to school.

Eventually, after hours of denials, Boswell-Johnson confessed, prosecutors said. He woke up in the early hours of Feb. 2 and drove to Fort Washington, parking his car down the street from Davis’s home, then sat on the steps two houses away waiting for Davis to emerge for work, detectives testified, describing Boswell-Johnson’s confession.

“I want to talk about child support,” Boswell-Johnson said to her, according to his recorded police interview.

When she refused to talk, he pulled a gun from his waistband and fired, he said in his confession. Davis was shot in the back and Chloe suffered two gunshot wounds, with the bullets piercing her car seat, according to expert testimony at trial.

The close-range gunfire was so violent, according to prosecutors, it blew Chloe out of her car seat and the beads out of her hair.

“He went there to terminate his child support,” Assistant State’s Attorney Joseph Ruddy said after showing jurors the bloodstained pink onesie Chloe was wearing the morning of the shooting. “Chloe was a bill . . . a bill that he wasn’t going to pay.”

Boswell-Johnson fled the shooting scene, leaving his daughter wounded in the car before he went to work at an auto glass shop in Rockville, he told police.

He later told detectives he tossed the gun, wrapped in a Walmart bag, in a dumpster near his workplace. But by the time Boswell-Johnson disclosed the location of the gun, it was too difficult for authorities to recover it. The gun had become part of a compacted trash heap about the size of six train cars, testimony showed. Despite extensive searches, police did not find it.

In his closing argument, Jones played two hours of video from his client’s interview with police showing him consistently denying his involvement. Jones said police kept Boswell-Johnson for more than 24 hours, cornered him in a small room and psychologically pressured him. Jones likened his client to the character of Kunta Kinte from “Roots,” a slave who was beaten into submission.

“They caged him in to the room,” Jones said. “They wouldn’t let him up until he regurgitated what they told him.”

“I already told on myself,” Boswell-Johnson said to police during his recorded confession. “I’m going to jail for life, man.”

Jones said he plans to appeal and ask for a retrial, saying that the police did not attempt to consider other suspects with motives and that his client was not effectively allowed to confront detectives’ trial testimony.

Alsobrooks said her office plans to ask at a hearing in June that Boswell-Johnson get a life sentence without parole.

The case against Boswell-Johnson is the second Alsobrooks has personally prosecuted since she took office in 2010. In 2013, Alsobrooks took the lead in a case whose details echo the killings of Davis and her daughter.

In that case, D.C. police officer Richmond Phillips killed his mistress and left their infant daughter in a hot SUV to die — also in a disagreement over child support payments. Phillips was convicted of two counts of murder.

Repeating what she told the jury in 2013 in Phillips’s case, Alsobrooks said to jurors in Boswell-Johnson’s trial: “What happens in darkness,” she said, “will surely come out in the light.”