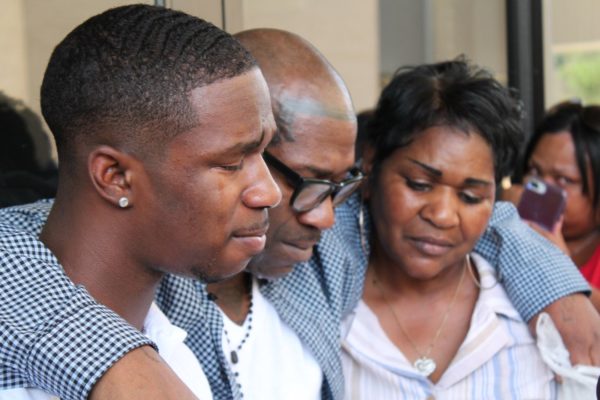 A Louisiana man who spent 17 years behind bars for an armed robbery he didn’t commit walked free and into the arms of tearful relatives Thursday after a re-examination of fingerprint evidence cleared him in a 2001 stick-up in New Orleans.

Royal Clark Jr., 42, cracked a smile and shed a few tears of his own after his conviction was overturned. As reported by The Associated Press, guards led the former prisoner, still shackled and sporting an orange jumpsuit, past an army of anxious family members awaiting his release.

“I don’t know what to say,” Clark said after strolling out of the Jefferson County Jail to the cheers and applause of family, friends and supporters. The newly freed man stood flanked by his father, Royal Clark Sr.; teenage son Royal Clark III; and sister Lakitta Clark , among others.

Clark was arrested in 2002 and convicted the following year, on his 25th birthday, in the armed robbery of a Burger King in suburban New Orleans. A jury sentenced him to 49 years in prison.

The Innocence Project of New Orleans, which works to free wrongfully convicted defendants, took up his case in 2018 and called on the Jefferson Parish DA’s office, as well as the sheriff’s office to re-examines fingerprint evidence collected during the police investigation. Thanks to advances in fingerprint technology that weren’t available at the time, authorities were able to determine that prints lifted from a cup the perp drank from before the stick-up didn’t match Clark’s.

“We all now know what he has been saying all along — that he is factually innocent of this crime which was committed by someone else,” said Clark’s lawyer, Kia Hall Hayes, with the Innocence Project New Orleans.

The unknown prints were later uploaded to a state database, where they matched those of a 54-year-old man named Jessie Perry, who was convicted in a string of similar robberies in Harvey and Marrero.

“In light of this new evidence of innocence, the JPDA did not oppose Mr. Clark’s motion to vacate his conviction on Thursday,” the organization said in a press release.

Hayes argued Clark’s case is yet another example of the unreliability of eyewitness evidence. It was the testimony of a single witness, a restaurant worker, who misidentified Clark as the suspect more than two months after the robbery.

The witness later admitted that her attention was focused on the suspect’s gun, rather than his face.

“The risk of wrongful conviction is too great to prosecute solely based on eyewitness evidence without giving the jury the tools to properly evaluate it,” Hayes said in a statement.

Emily Maw, an Innocence Project attorney who also worked on the case, highlighted that had authorities not agreed to review the evidence, Clark would’ve remained in jail “until he was 74 years old.”

“There is currently no clear law that gives prisoners a right to ask for these forensic database searches in cases not involving DNA,” said Maw. “Mr. Clark’s exoneration has provided a second example in three months of the need for the Louisiana Legislature or the Louisiana Supreme Court to create a clear legal right for prisoners to access forensic databases in appropriate cases so that truth can prevail.”

In March, a match in a fingerprint database led Louisiana officials to vacate the conviction of Archie Williams, who was serving a life sentenced for a brutal rape and stabbing in 1983. Williams had spent 36 years behind bars.

Outside the courthouse Thursday, Clark said at times he thought he might never see freedom.

“I’m not going to sit here and lie and tell you I didn’t [give up hope],” he said. He added that through it all, he refused to let injustice turn him bitter.

His release comes just days after he celebrated his 42nd birthday on June 25, which also marked the 17th anniversary of his conviction.

“He was wrongfully convicted on his birthday,” Hayes told the court. “It’s the last birthday he will spend in prison for that crime.”