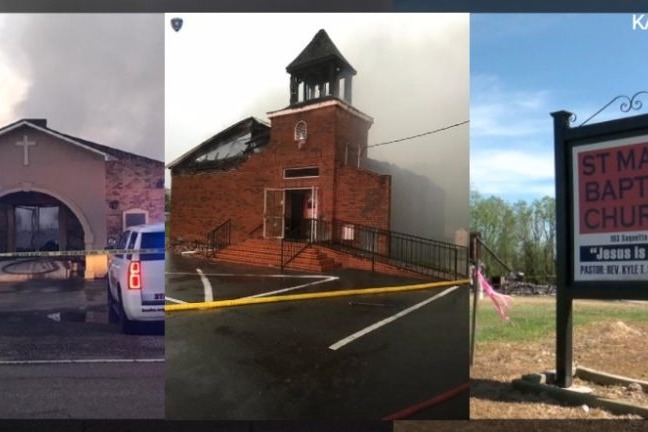 Fundraising efforts to benefit the Notre Dame Cathedral in Paris after its roof caught on fire Monday has already exceeded $1 billion dollars in just about 24 hours. That quick, generous response from around France and the rest of the world paled in comparison to relief efforts set up for the three Black churches in Louisiana burned down by a suspected white supremacist nearly two weeks ago.

The discrepancy in responses was not lost on social media users, who both downplayed and hyped up the clear differences in situations.

Meanwhile, the wealthiest French families and businesses have already come together to pledge about $1.2 billion to help rebuild the historic Notre Dame, which caught on fire Monday evening. The major blaze caused the structure’s spire to collapse and part of its roof to cave in. The cause of the fire was not immediately determined as investigators were continuing to work the scene.

President Emmanuel Macron said Tuesday that he planned to have the cathedral totally rebuilt in five years. With the generous donations pouring in, that timetable could prove realistic.

Even American entities were reaching deep in their pockets to help France rebuild, as the University of Notre Dame on Tuesday pledged $100,000.

But elsewhere in the United States, where three historically Black churches were burned to the ground in 10 days, fundraising efforts to repair and restore the damage to the historic structures there was proving elusive, at best. As of Tuesday afternoon, the official GoFundMe page created nearly a week ago to benefit all three churches hadn’t even broken the $250,000 point of a $1.8 million goal.

The three fires occurred in St. Laundry, a Louisiana parish north of Lafayette, between March 26 and April 4. The fires destroyed St. Mary Baptist Church in the community of Port Barre, Greater Union Baptist Church and Mount Pleasant Baptist Church in Opelousas. Each of the three churches is more than 100 years old and one of them had been remodeled just two years ago.

Like with Notre Dame, there were no reported injuries. But that and the fire were apparently where the similarities between the two situations ended.

A robust debate on social media about the difference in responses ensued, with Twitter users seemingly split down the middle. Some insisted the comparison was a case of apples to oranges while others hinted at racial reasons for the varying responses.

Not unexpectedly, President Donald Trump‘s Twitter fingers had plenty to type about with the Notre Dame inferno while they remained silent about Louisiana three weeks after the first fire struck there.

Mainstream media could be partially to blame for the relatively muted response to the Louisiana churches burning down. Many top news outlets painted a sympathetic picture of Holden Matthews, the suspected white supremacist facing some damning evidence that all but confirms he set the fires in Louis