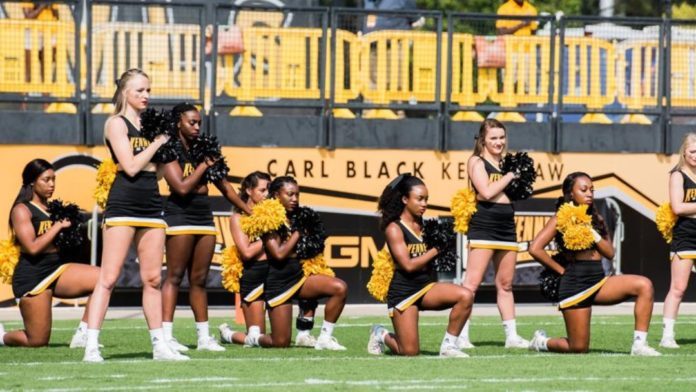 Taking a knee as a protest against alleged police misconduct might be continuing to rub the powers that be the wrong way, as seen in a case involving some Georgia college cheerleaders.

Four of the five cheerleaders who made news last year when they knelt during the national anthem at a Kennesaw State University home football game did not make the cheerleading squad this year, the Atlanta Journal-Constitution and other news organizations report.

The incident that took place Sept. 30 prompted the school to ban cheerleaders from pre-game activities, WXIA reported. Later, the school reversed that move.

The uproar caused by the cheerleaders’ action prompted the University of Georgia to investigate and rule that Kennesaw State administrators failed to follow the school’s own guidance that stipulates that student protests against the anthem amount to constitutionally protected free speech.

In response to the revelations that the protesting cheerleaders would not continue, KSU officials said the number of people who tried out for the 52 spots on this year’s squad increase from 61 last year to 95 this year, according to the Journal-Constitution.

All in all, seven who were on last year’s squad did not make the cut this year, the school said.

The students who took the knee are dealing with the development, according to the news outlet.

“While they are disappointed, they’ve accepted it and went on with their academic lives,” Davante Lewis, a spokesman for the cheerleaders, said Wednesday in an interview with the Journal-Constitution.

Cheerleader Toomia Dean, who was not asked to return, told WXIA that applying to the squad had become more competitive, but she believes that taking a knee is what caused her to be cut.

“I think it played a role because I know my skills, and I had the skills two years prior to that, so I know what I can do,” she said.

The report by the University of Georgia prompted previous school president Sam Olens to announce his resignation. New president Pamela Whitten, hired in June, told the Journal-Constitution she would be willing to meet with the cheerleaders and students who were involved in the protests.