DefenderNetwork.com
Home NEWS National Georgia cop put on leave after tasing Black woman on her own... 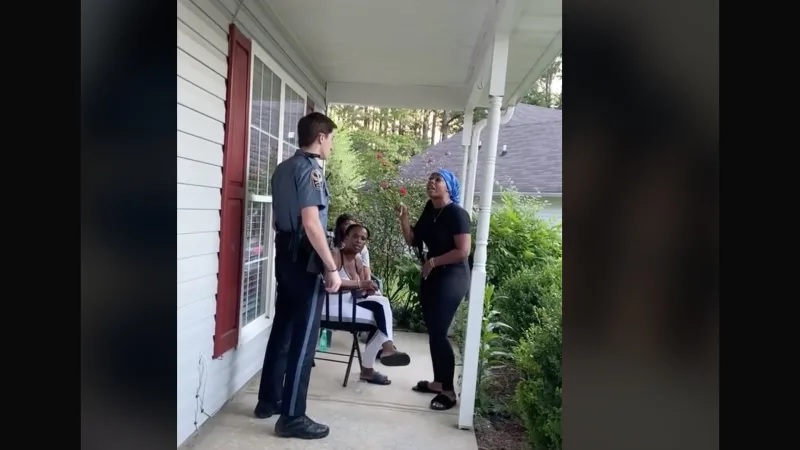 In Georgia, an investigation has been launched after a video went viral showing a cop tasing a Black woman on her front porch.

According to AJC, the video shows an officer approaching a group of Black women sitting on their front porch. He tells one of the women, identified as 22-year-old Kyndesia Smith, that she’s speaking too loud and threatens to arrest her. “I’m not going nowhere, it doesn’t matter. You’re on our property. We did not call you,” Smith tells the officer in the video. The officer then struggles to arrest Smith and eventually pulls out his taser. Shortly after telling Smith to get on the ground, he fires the taser. The video has been viewed over 14 million times on TikTok, where it was initially posted.

The officer, currently only identified as M. Oxford, wrote in a police report that he was responding to a call regarding property damage. The neighbor who made the call showed surveillance footage to the police of a group of people arriving at her home and throwing a bottle at her car. The neighbor told police that one of the women involved said she would “kick her son in the head,” before leaving to a nearby house.

One of the women wearing a white tank top and pants appeared to match the description of the person in the neighbor’s security footage, Oxford wrote in his report. She was later identified as Aytra Thomas.

“The other people that were on scene with her continued to yell and scream at me, making it very difficult to speak with Aytra and further conduct my investigation,” Oxford wrote.

Another woman, identified as 22-year-old Kyndesia Smith, continued to yell and shout at the officer, he wrote in his report. Oxford said he told Smith she needed to quiet down or move away from the scene if she didn’t want to be arrested on obstruction charges.

Smith was later arrested and charged with felony obstruction and simple battery against a police officer. She was released Wednesday night on a $5,900 bond. Even with the added details of what happened, there was no need for this to escalate to the level it did. As a cop, it’s Oxford’s job to de-escalate the situation, not yell at people and tase them in the fucking leg.

As a result of the video, an investigation has been launched into the circumstances of the arrest. “The officer has been placed in an administrative role in the police department pending an internal investigation,” Gwinnett police spokesman Cpl. Collin Flynn told AJC.