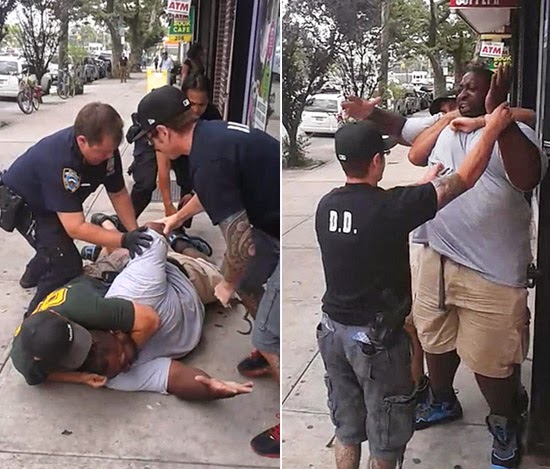 A fundraising effort to support the family of the New York City Police officer fired five years after the deadly choking of Eric Garner is picking up steam.

“Support NYC Police Officer Daniel Pantaleo and his family,” the page organizer urged in a post.

It also criticizes New York City Mayor Bill de Blasio, who while campaigning to be the 2020 Democratic presidential nominee has also been speaking out in support of Garner’s family.

“Mayor de Blasio’s anti-police rhetoric contributed toward the decision to fire him,” the page organizer said. “Let’s help an officer in need who was only doing his job! It’s the least we can do for a brother in blue with a newborn and bills to pay!”

It’s not the first time supporters have rallied around a man accused of killing an unarmed Black person.

Former Ferguson, Missouri, cop Darren Wilson resigned from his department in November 2014 with a reported $1 million in donations after he escaped any sort of punishment for gunning down unarmed Black teenager Michael Brown in August 2014.

He was acquitted in the fatal shooting of Black teen Trayvon Martin, after claiming he killed the unarmed Martin in self defense on Feb. 26, 2012.

Efforts to support Zimmerman’s legal defense netted about $200,000 from supporters in about a month’s time.

By November of that same year, he was selling autographs to fund his legal defense.

The Pantaleo fundraising page made no mention of Garner, the unarmed Black man killed after being accused of selling single cigarettes outside a store on Staten Island.

Pantaleo placed him in a deadly chokehold while trying to arrest him on July 17, 2014.

New York City Police Commissioner James O’Neill announced Monday the former cop had been fired, and soon after his police union told reporters it would try to overturn the termination decision.

Garner’s mother, Gwen Carr, responded to the plan during a press conference Monday.

She said Pantaleo’s team can appeal all it wants, “but I’m out here for the long run.”

“And you cannot scare me away,” she said. “Yeah, Pantaleo, you may have lost your job. But I lost a son.”