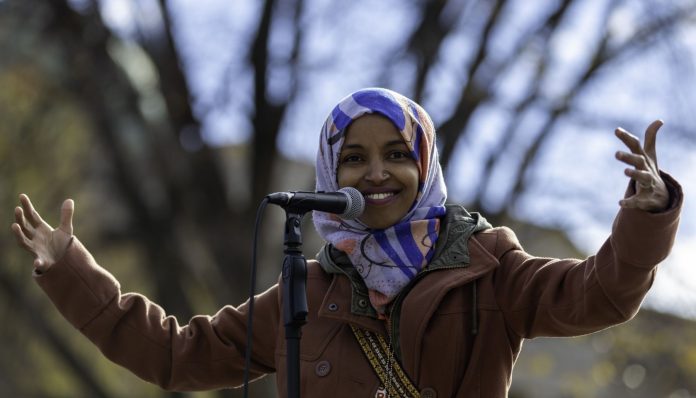 Rep. Ilhan Omar terrifies Republicans and she is often the target of their bigotry. However, a GOP Florida congressman hit a new low with his comments about the Somalian American Congresswoman.

According to the Tampa Bay Times, George Buck, a Republican running for Congress in St. Petersburg, sent out a fundraising email calling for Omar to be killed. The Nov. 26 letter reportedly “repeated an unsupported accusation that U.S. Rep. Ilhan Omar, a Somali-born Democrat representing Minnesota, secretly works for the country of Qatar and should be gravely punished for it. ‘We should hang these traitors where they stand,’ the email said.”

Buck is taking no accountability even though his signature is at the bottom of the email. He told the Tampa Bay Times, “That was not me. I did not see that. I would never talk like that.”

However, the Tampa Bay Times wrote that he later sent a statement revising his stance:

“The statement included the constitutional definition of treason and the federal punishment: ‘death, or shall be imprisoned not less than five years and fined under this title but not less than $10,000. Anyone who commits treason against the United States should be tried to the full extent of the law,’ Buck said. He declined to elaborate further.”

In reaction to Buck’s call for violence, Pinellas County GOP chairman Todd Jennings wrote on Facebook, “There is no room for this kind of inflammatory rhetoric in either political party. No one should ever condone a candidate’s call for violence.”

Sadly, violent and racist attacks toward Omar is constant. Back in May, Candace Owens tweeted that she should be deported, “In her defense, supporting terrorists in the Middle East seems to me to be the next logical step for a party that defends MS-13, demands open borders, and hates Jewish people and babies. Separately, how funny if Trump just deported her?”

Back in July, Trump chanted about Omar “Send her back” at a disturbing political rally. Death threats against the congresswoman have also increased after Trump exploited Omar’s comment about the 9/11 terrorist attacks, which was taken out of context by the president.