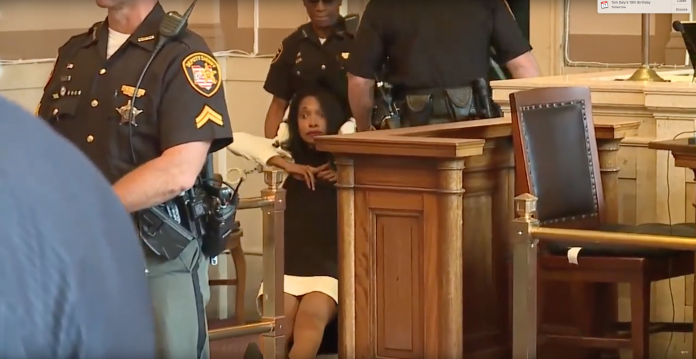 Former Hamilton County, Ohio Juvenile Judge Tracie Hunter appeared overcome with emotion as she was literally dragged from a Cincinnati courtroomby a sheriff’s deputy on Monday, July 22, after she was sentenced to six months in jail for charges stemming from a controversial conviction in 2014.

A jury convicted Hunter of unlawful interest in a public contract after she was accused of helping her brother keep his county job by mishandling a confidential document.

Hunter was initially charged with committing nine felonies. After charges were dropped on all but one, she was convicted and entered into a lengthy appeals process. The state supreme court of Ohio refused to hear her appeal, sending the case back to the lower court and resulting in her ultimate sentencing.

With a courtroom packed with supporters — and many more who stood outside of the proceedings — Hamilton County Common Pleas Judge Patrick Dinkelacker dispensed Hunter’s punishment.

Prior to sentencing, Hamilton County Prosecutor Joe Deters wrote a letter asking the court to consider having Hunter undergo psychiatric evaluation based on questions he has about what he calls Hunter’s “mental condition,” according to reporting from WLWT5.

Hunter’s attorney David Singleton disagreed with the request, adding that he “couldn’t believe” Deters would ask the court to have Hunter undergo evaluation and that they plan to file a motion to dismiss the case.

With all of the support Hunter has received based on both real and perceived biases during the initial trial and appeals process, Mayor John Cranley wrote a letter to Dinkelacker asking him not to place Hunter in prison, saying that she has suffered as a result of her conviction and doesn’t appear to pose any risks to others.

Postcards were sent to Dinkelacker’s house asking for leniency in his sentencing. He read some of the postcards during the hearing.

At least one of Hunter’s supporters was arrested at the courthouse after trying to intervene when deputies attempted to take Hunter into custody.

Others shouted, “No Justice, No Peace,” and accused the court of racism.

In June, former Cincinnati State Sen. Eric Kearney had expressed to NNPA Newswirethat Hunter’s incarceration was “going to be a problem” and the city would “explode. I’m telling you, black people [in Cincinnati] are not going to take [Hunter going to jail] lightly,” Kearney said. “The city is on edge.”

Kearney, Hunter and her vast number of supporters have said the process used to convict her wreaked of politics, corruption, nepotism and racism.

The jury that rendered the guilty verdict in her trial was comprised of political foes and others associated with the prosecutors and a Republican establishment that didn’t take kindly to Hunter breaking the GOP and white-male dominated stronghold to win a seat on the bench in 2010, her supporters have pointed out.

For example, one of the jurors worked for WCPO Television, a local station that has filed numerous lawsuits against Hunter.

Court documents revealed that the jury foreman contributed $500 to state Sen. Bill Seitz, the father of county jury coordinator Brad Seitz, who was responsible for compiling the panel of jurors that arrived at the guilty verdict, which required a unanimous decision from the jury.

Hunter said that the only three black jurors, none of whom had known ties to prosecutors and all of whom held out for acquittal, ultimately yielded to pressure from other jurors. The judge refused to allow defense lawyers to poll the jury after announcing the verdict.

In every American criminal trial, particularly those that end in guilty verdicts, it’s the right of attorneys to request the judge to poll all 12 jurors to ensure each is in agreement with the verdict.

“The judge refused a motion for a retrial after he refused to poll the jury, in clear violation of the law and at the request of my attorney,” Hunter told NNPA Newswire in June.

“If the judge polled the jury, it happened in a blink, but I don’t remember that happening,” Kearney said.

At the close of the trial, three jurors came forward and said that their true verdict was not guilty and “if Judge Norbert Nadel had polled the jury, they would have said so,” Hunter said.

Hunter also wanted her supporters to know that she is not suicidal.

“I want everyone to know that I don’t drink … I don’t do drugs … I have no intention of harming myself,” she said.