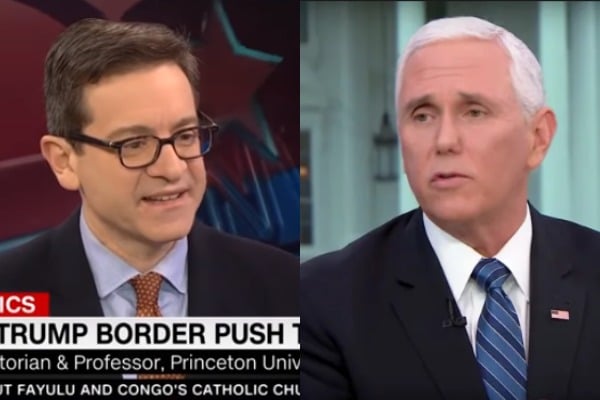 Princeton historian Julian Zelizer ripped into Vice President Mike Pence on Monday for favorably comparing Donald Trump to the late civil rights icon Martin Luther King Jr., calling it a “perversion” of King’s legacy to even be linked to Trump.

“There’s no way to look at [King’s] history and align it with anything this administration is doing,” Zelizer told CNN this week. “It’s just the opposite.”

Zelizer’s blistering rebuke came in response to a clip where Pence quoted MLK Jr. in an attempt compare his nonviolent push for social justice and civil rights to the president’s efforts to build a border wall between the U.S. and Mexico.

“The policies of this administration, from the border wall to voting rights restrictions, are antithetical to everything that Martin Luther King fought for,” the historian said, adding, “So having Vice President Pence invoke Martin Luther King, for this deal or for anything else, really flies in the face of his memory.”

It was during a Sunday interview with CBS’ “Face the Nation” that the vice president invoked a line from King’s famous “I Have a Dream” speech to encourage support for the president’s coveted border wall, saying, “Now is the time to make real the promises of democracy.”

Pence contended that Trump’s push for stronger border protections was as “inspiring” as MLK’s call for equality and civil rights.

“You think of how he changed America, he inspired us to change through the legislative process, to become a more perfect union,” the VP said. “That is exactly what President Trump is calling on the Congress to do, come to the table in a spirit of good faith.”

Zelizer didn’t quite see it that way.

“There is no justification for Vice President Pence to use King’s memory to support the administration’s policies,” he wrote in an op-ed. “Doing so is a perversion of the work of one of the greatest social activists of modern times.”