DefenderNetwork.com
Home NEWS National How a question from Rep. Sheila Jackson Lee led to a joke... 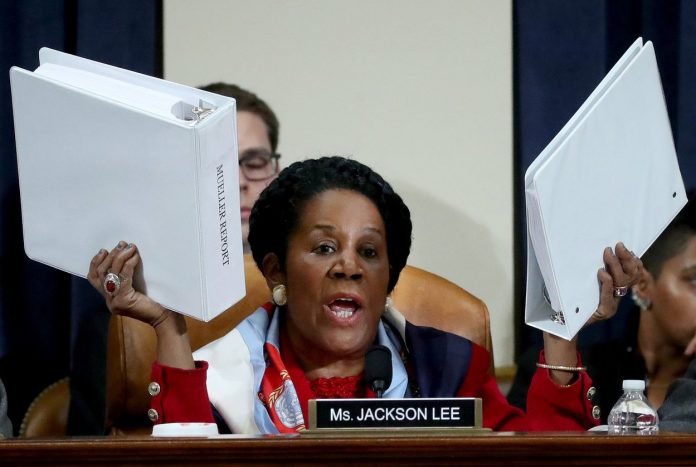 A question by U.S. Rep. Sheila Jackson Lee, D-Houston, at the House Judiciary Committee’s first impeachment hearing Wednesday led to a comment about the president’s son that set off demands by Republicans for an apology.

When it was her turn to ask questions of the witnesses, Jackson Lee drew a parallel between President Donald Trump and a monarch.

“What comparisons can we make between kings, that the framers were afraid of, and the president’s conduct today?” Jackson Lee asked Pamela Karlan, a constitutional law expert and professor at Stanford Law School.

“While the president can name his son Barron, he can’t make him a baron,” Karlan responded, inciting light laughter in the room. Karlan was one of four legal experts called to testify on the constitutional grounds for presidential impeachment.

Republicans took issue with the mention of Trump’s 13-year-old son, and used the comment to cast Karlan as biased. Karlan apologized for the remark later in the hearing.

The Trump campaign issued a statement calling on Democrats to repudiate “Karlan and call on her to personally apologize to the president and first lady for mocking their son on national TV.”

“Only in the minds of crazed liberals is it funny to drag a 13-year-old child into the impeachment nonsense,” the Trump campaign said. “…Hunter Biden is supposedly off-limits for liberals but a 13-year-old boy is fair game. Disgusting.”

“A minor child deserves privacy and should be kept out of politics. Pamela Karlan, you should be ashamed of your very angry and obviously biased public pandering, and using a child to do it,” Melana Trump tweeted.

A minor child deserves privacy and should be kept out of politics. Pamela Karlan, you should be ashamed of your very angry and obviously biased public pandering, and using a child to do it.233K3:50 PM – Dec 4, 2019Twitter Ads info and privacy149K people are talking about this

U.S. Rep. Matt Gaetz, R-Florida, one of Trump’s most loyal allies in the House, also denounced the move shortly after Jackson Lee’s question. He and Karlan had a heated exchange where he questioned her about campaign donations she’s made to Democratic candidates, calling into question her objectivity. Karlan said she has previously donated to Democrats including Barack Obama, Hillary Clinton and Elizabeth Warren.

“When you invoke the president’s son’s name here, when you try to make a little joke out of referencing Barron Trump, that does not lend credibility to your argument,” Gaetz said. “It makes you look mean.”

The impeachment inquiry into what actions Trump took to push Ukraine to investigate his political rival started in the House Intelligence Committee, but the House Judiciary Committee would be responsible for drafting the articles of impeachment. The House would vote on whether to impeach Trump, before the Republican-led Senate would make the final decision about whether to remove him from office.