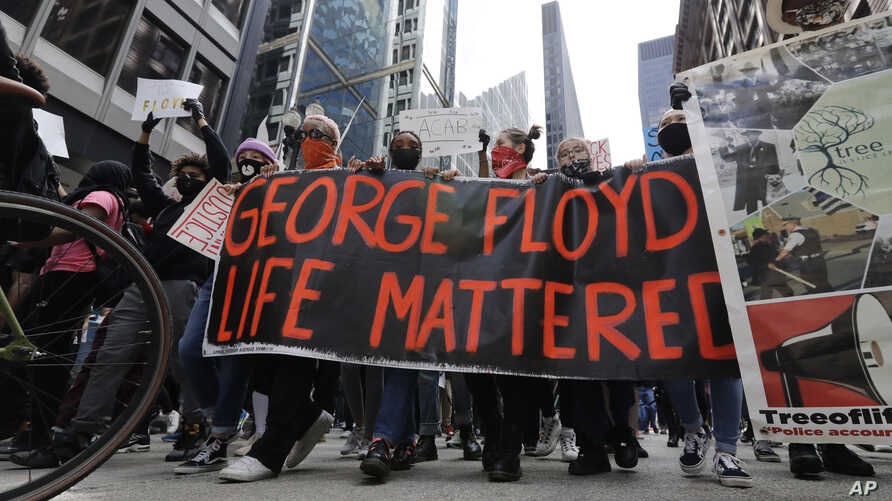 The abhorrent viral video of George Floyd pleading for his life to be spared as Derek Chauvin knelt on his neck for nearly nine minutes has prompted outrage. To evoke real change, we must go beyond the hashtags and take actionable steps towards supporting those who are leading the charge to seek justice for Floyd and other Black men and women whose lives were senselessly taken away at the hands of law enforcement officials.

Amid the unrest in Minneapolis and cities throughout the country following the murder of Floyd, social and racial equity organizations are rallying around those who are on the frontlines fighting for justice. We’ve rounded up a list of organizations, funds and initiatives where your monetary contributions will be instrumental in furthering the collective mission of civic groups who are dedicated to ensuring that demonstrators have the resources needed to continue this meaningful work.

Floyd’s brother Philonise Floyd launched a GoFundMe campaign to support his loved ones. The money raised through the fundraiser will cover the funeral and burial expenses for Floyd, ongoing legal costs as the family looks to seek justice and mental and grief counseling to help them heal from this traumatic loss. “On May 25, 2020, my life shattered as I learned of the tragic passing of my dear brother, George,” read a statement from Philonise. “My family and I watched in absolute horror as the now infamous and horrifying video began to spread quickly throughout social media. What we saw on that tape left us shell shocked. From the bottom of our hearts my family thanks each of you who have reached out.” DONATE HERE.

The Minnesota Freedom Fund is a Minneapolis-based nonprofit dedicated to bail reform. The organization covers the costs of criminal bail and immigration bond to break socio-economic barriers that stand in the way of justice. The nonprofit is working with the National Lawyers Guild and Legal Rights Center to ensure the bails for protesters are being paid for. The organization has also shown support for grassroots groups that include Black Visions Collective, Twin Cities Coalition for Justice 4 Jamar, Reclaim the Block and Northstar Health Collective. “Black, brown and indigenous communities have been terrorized by the system and brutalized and murdered, and there has been no justice. Now we can see there is support coming from everywhere,” Tonja Honsey, Executive Director, Minnesota Freedom Fund, told Rolling Stone. DONATE HERE.

From addressing the brutality of “stop and frisk” tactics that have been exacerbated due to social distancing measures in New York City to seeking justice for the families of Ahmaud Arbery, Breonna Taylor and George Floyd, Until Freedom is doing meaningful work to evoke change. The grassroots organization—which is led by criminal justice reform advocate and hip-hop artist Mysonne Linen, civil rights activist and community organizer Tamika D. Mallory, racial justice and civil rights activist Linda Sarsour and lawyer Angelo Pinto—develops initiatives centered on systemic and racial injustice. “The reason why buildings are burning is because this city, this state would prefer preserving that white nationalism and that white supremacist mindset over arresting, charging and helping to convict four officers who killed a Black man,” said Mallory during a press conference. “That is the reality of what we’re dealing with. We are in a state of emergency.” DONATE HERE.

Former NFL player and activist Colin Kaepernick has led several impactful initiatives and campaigns surrounding racial and social justice through his Know Your Rights Camp. He recently launched the Know Your Rights Camp Legal Defense Initiative to support protesters who have been arrested in Minneapolis, Minnesota. As part of the effort, the organization is working with defense lawyers to provide legal assistance and resources for those in need. “When there is an injustice within our community, it is our legal right to address it, by any means necessary,” read a statement on the Know Your Rights Camp website. DONATE HERE.

The ACLU of Minnesota

The ACLU of Minnesota is a nonprofit that is centered on protecting the civil rights and liberties of individuals in the state through “litigation, lobbying, and community engagement.” Since the murder of George Floyd, the organization has stepped up on several fronts to seek justice. Aside from sharing resources for citizens to call upon elected officials and demand justice, the organization is providing legal assistance for protesters. “You can’t watch this appalling video posted by brave eyewitnesses on social media without seeing police officers’ callous disregard for a Black man’s life, and you can’t help but conclude that yet another tragic death was both needless and preventable,” ACLU-MN Executive Director John Gordon said in a statement. DONATE HERE.

The NAACP Legal Defense and Educational Fund is one of the leading organizations for fighting racial injustice through several litigation and advocacy efforts. In the wake of George Floyd’s murder, the nonprofit—which is the nation’s first civil and human rights law organization—is putting the focus on ensuring demonstrators have legal protection. “All residents must be afforded their right to protest without fear of violence or repercussions,” read a statement released by Janai Nelson, LDF’s Associate Director-Counsel. “We demand that all protesters are protected – and that any law enforcement engagement with protestors is focused on ensuring the safety of protesters and guarding their constitutional rights.” DONATE HERE.