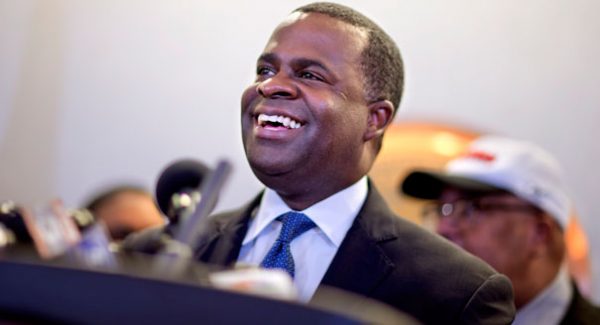 Former Atlanta mayor Kasim Reed is headed back to his alma mater after being chosen as the commencement speaker for Howard University‘s graduating class of 2019.

Not everyone is thrilled by the news, however.

Howard University President Wayne Frederick announced that Reed, an alumnus of the historically Black university, would address the school’s graduates, their families and school officials during the May 11 commencement ceremony.

Reed will also be honored with the Presidential Medal of Achievement.

“His body of work in a life dedicated to public service and commitment to higher education exudes our motto of truth and service,” Frederick said in a news release.

In a video posted to Twitter, the two-term mayor thanked President Frederick and the entire HU community for “inviting me back home.”

“I couldn’t be more excited to be coming home to Howard University to be the commencement orator for the class of 2019,” Reed said. “So on Saturday May 11, I’ll be there. I’ll be excited and I’ll be ready, because HU, you know. Let’s go!”

The college’s decision was met with online criticism, however, from people who pointed to the ongoing investigation into Reed’s administration, The Atlanta Journal-Constitution reported. Last year, a grand jury issued several subpoenas demanding answers about exorbitant credit card spending by Mayor Reed and his staff, along with travel records.

“Howard should be embarrassed,” one critic wrote in response to news that Reed would be the graduation speaker. “I hope the students do some sort of demonstration. This man is evil and does not deserve to look at or speak to the brilliant minds leaving Howard University this year.”

“As it stands, Kasim’s former administration is currently under investigation for corruption,” they added. “It’s very possible that he, himself, will be locked up. He is despicable.”

“Kasim Reed is the speaker at Howard’s commencement…the jokes and the abuses of power write themselves,” another critic chimed in.

“I just wanna discuss the caliber of speakers that Howard has had in recent years. And we get stuck with Kasim Reed?? Throw the whole commencement away,” another wrote.

Reed also found himself in hot water after an AJC investigation found that he, his director of human resources, and several city council members in 2017 had doled out more than $800,000 worth of year-end bonuses and gifts — ultimately hitting taxpayers in the pocket.

“Internal investigations into the bonuses found they violated city ordinances and the state constitution, which prohibits governments from using tax dollars for gifts,” the newspaper reported.

Current Atlanta Mayor Keisha Lance Bottoms was met with similar criticism when she was named as Spelman College’s commencement speaker last month. Several students at the historically Black, all-women college disagreed with having Bottoms come and speak, arguing that she supported gentrification and beefing up police presence in Atlanta.

“She’s a very good role model, but that doesn’t mean that she should be a commencement speaker,” student Alexi Dickerson told WSB-TV. “Gentrification isn’t really a good thing for black areas because it doesn’t help the black people rise up.”