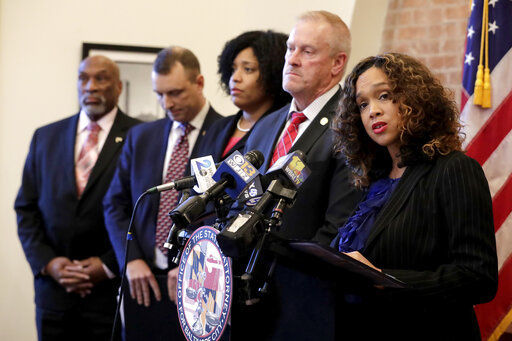 More than two dozen correctional officers in Baltimore were charged Tuesday with using excessive force on prisoners at state-operated jails in a city plagued by decades of institutional corruption, inside and outside jailhouse walls.

Maryland corrections secretary Robert Green said all the indicted officers have been on administrative leave since 2018, when the state Department of Public Safety and Correctional Services began investigating the allegations.

Gov. Larry Hogan said in a statement that his administration has no tolerance for corruption in the state’s correctional system.

“Our correctional officers have one of the most difficult jobs in all of public safety, and we will not let the criminal behavior of the few tarnish the great work of the nearly 5,000 dedicated officers who serve with distinction every single day,” he said.

Hogan, a Republican, said the department’s anti-corruption actions have led to the arrests and convictions of more than 200 officers, inmates and “citizen accomplices.”

In 2015, Maryland closed the men’s section of a state-run Baltimore jail that was notorious for its decrepit conditions, criminal activity and corruption. In 2013, a federal indictment exposed a sophisticated smuggling ring operating inside the Baltimore City Detention Center, involving dozens of gang members and correctional officers. The investigation also revealed that a jailhouse gang leader had impregnated four female guards.

Corruption has infected many corners of Baltimore’s city government.

Most recently, disgraced former mayor Catherine Pugh pleaded guilty to federal charges stemming from sales of her self-published children’s books. Another former mayor, Sheila Dixon, left office in 2010 as part of a plea deal for misappropriating about $500 in gift cards meant for needy families.