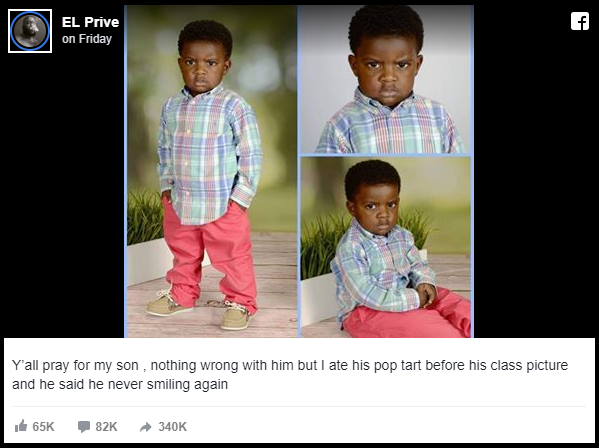 The mother of a child whose picture-day scowl has taken the Internet by storm is concerned after she says strangers are using the viral photo as a ploy to make a quick buck.

“It still doesn’t sit well with me that he’s being posted worldwide,” Tantarnea Arnold wrote of her son, Makari Arnold, in a Facebook post. “But like I said … it’s out there now and we can’t stop it. However, if you happen to see a post where someone is claiming him as there child … that is not funny. I don’t care if it is just a joke. Don’t be out here trying to use our son for likes or money.”

Arnold told New Orleans station WLTV the photos were taken at Makari’s daycare in 2017. The pictures, showing a dapper Makari with a pout on his face, went viral after his cousin posted them online.

Although she admits some of the posts/memes of her son made her chuckle, Arnold said she won’t tolerate folks claiming to be her son’s parents and trying to make money off of him.

“It’s disrespectful,” she told the station. “We just really want to get rid of all our social media and we’re on social media to stay in touch with our family and to share special moments. It really feels like a piece of you has been taken.”

A man who goes by the name Bill Muhammad is accused of sharing little Makari’s photos and claiming the boy as his son. On Nov. 17, Muhammad shared three pictures of the pouting child with the cheeky caption, “Y’all pray for my son. Nothing wrong with him but I ate his pop tart before his class picture and he said he never smiling again.”

Muhammad then updated the caption to include his CashApp screen name “@$bandobil,” allowing him to send and receive money electronically. It wasn’t long before the post went viral, racking up 156k shares and 40k comments in a matter of days.

Things came crumbling down, however, when Arnold outed Muhammad as a fake. Makari’s real father, Michael Arnold, shared Muhammad’s post and urged social media users to alert him of any other GoFundMe of CashApp accounts regarding his little boy.

“What type of weirdo claims somebody else son