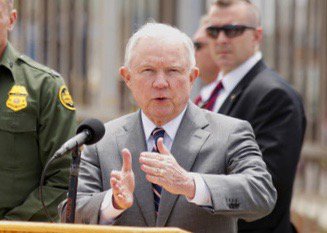 Attorney General Jeff Sessions on Thursday cited a Bible passage to defend his department’s policy of prosecuting everyone who crosses the border from Mexico, insisting that God has ordained the government’s separation of immigrant parents from their children.

“I would cite you to the Apostle Paul and his clear and wise command in Romans 13, to obey the laws of the government because God has ordained the government for his purposes,” Sessions said during a speech to law enforcement officers in Fort Wayne, Ind. “Orderly and lawful processes are good in themselves. Consistent and fair application of the law is in itself a good and moral thing, and that protects the weak and protects the lawful.”

As noted in a report from the Washington Post, government officials have been known to use the Bible to defend their policies against the disenfranchised — take, for instance, the Republicans who have quoted 2 Thessalonians (“if a man will not work, he shall not eat”) to justify more stringent food stamps requirements.

But the verse that Sessions cited, Romans 13, is an unusual choice, according to an expert contacted by the Post.

The other, Fea said, “is in the 1840s and 1850s, when Romans 13 is invoked by defenders of the South or defenders of slavery to ward off abolitionists who believed that slavery is wrong. I mean, this is the same argument that Southern slaveholders and the advocates of a Southern way of life made.”

In May, Sessions announced a zero-tolerance policy in which the Justice Department would begin prosecuting everyone who crosses the Southwest border. Part of the policy shift meant that migrants traveling with children or unaccompanied minors end up detained instead of released; U.S. immigration law charges adults with a crime, but not the children, which means they’re held separately.

The Associated Press cited U.S. Customs and Border Protection figures from two weeks in May in which more than 650 children were separated from parents. Reports from the same month that the government lost track of 1,475 children sparked a national outcry.