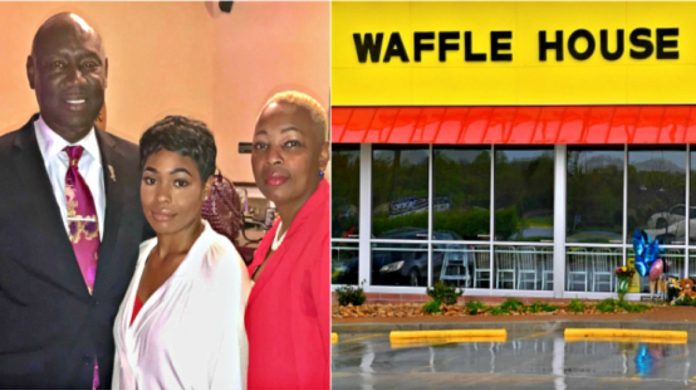 Civil rights activists showed up in full force on Monday in Saraland, Alabama to urge prosecutors to drop charges against a Black woman who was violently arrested at a local Waffle House in April.

The groups delivered a petition with 50,000 signatures seeking the dismissal of resisting arrest charges against Chikesia Clemons, WKRG-TV reported.

Three white officers were captured in a viral video slamming 25-year-old Clemons to the floor of the restaurant during the arrest. The cops threatened to break her arm, placed a hand on her throat and exposed her breast. A phone call from a restaurant worker who got into an argument with Clemons prompted the arrest.

“There is no way it would’ve crossed the minds of those officers to treat a white woman that way, given the same circumstances,” said a statement from Color of Change, one of the groups involved in the petition drive. “This has to end, Black women deserve to be treated with respect and dignity!”

So far, the police department has declined to drop the charges or discipline the officer, alleging that Clemson was drunk and threatened to shoot up the place before the arrest.

The incident happened in the aftermath of the arrest of two Black men at a Starbucks in Philadelphia. A manager called the cops because they were doing what scores of people do every day at Starbucks—using the coffee shop as a meeting place before making a purchase.

The NAACP and Black Lives Matter were among the groups that participated in the protest and delivery of the petition to Saraland Municipal Court, according to the news outlet. Clemons was also in attendance.