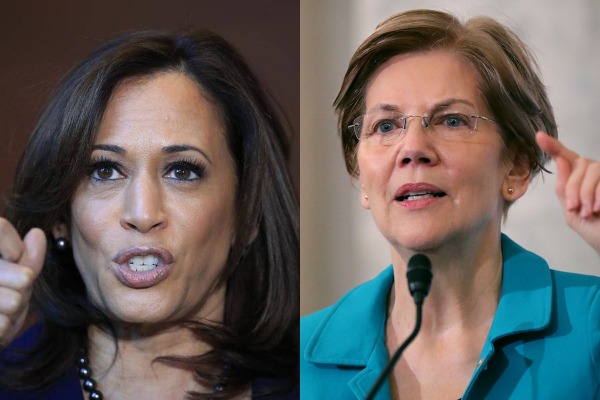 Democratic presidential hopefuls Sens. Kamala Harris of California and Elizabeth Warren of Massachusetts have both said recently that they support the idea of reparations for Black Americans impacted by the legacy of slavery.

Harris, who announced her bid for president last month, discussed the issue on New York radio show “The Breakfast Club,” where she agreed with hosts that reparations and race-conscious policy are needed to begin addressing problems of “inequities” and discrimination in America.

“We have to be honest that people in this country do not start from the same place or have access to the same opportunities,” Harris said in a statement to The New York Times on Thursday, doubling down on her remarks. “I’m serious about taking an approach that would change policies and structures and make real investments in Black communities.”

Warren has also voiced her support for reparations.

“We must confront the dark history of slavery and government-sanctioned discrimination in this country that has had many consequences including undermining the ability of Black families to build wealth in America for generations,” Warren said Thursday in a statement.

She added: “Black families have had a much steeper hill to climb — and we need systemic, structural changes to address that.”

As reported by Fox News, reparations would involve the federal government’s acknowledgement of the ongoing legacy of slavery and race-based discrimination, and provide compensation to those affected by it. Policy experts estimate such a move could cost trillions of dollars. The United States Gross National Product, a measure of all the goods and services produced by American residents and companies, is approximately $19.4 trillion.

Not everyone has been on board with it. Vermont Sen. Bernie Sanders (I) totally dismissed the idea in 2016, saying reparations would be “divisive.” Former Secretary of State Hillary Clinton and President Barack Obama have also had reservations on the issue.

Other prominent Democrats have offered alternative solutions to address America’s issues of social and racial inequality. Sen. Cory Booker of New Jersey, who’s also running for president, has proposed helping children from low-income families with a so-called “baby bonds policy,” which would provide them with government-funded savings accounts that rise to as much as $50,000 for the lowest income brackets, The New York Times reported.

Meanwhile, Sen. Kirsten Gillibrand of New York has thrown her support behind a proposal that would allow Americans who don’t have checking accounts to bank at their local post office. The newspaper noted that the bulk of America’s unbanked population are people of color.