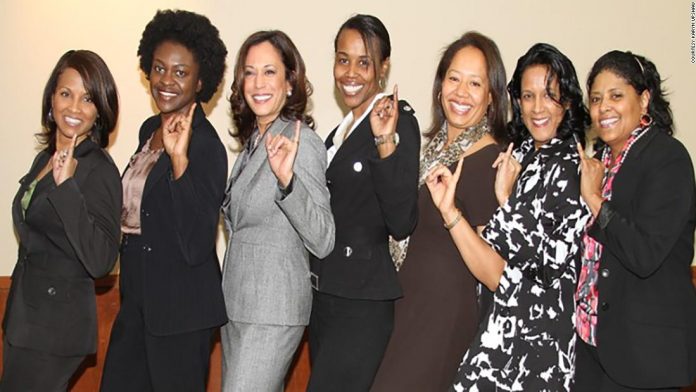 As Kamala Harris sets her sights on the White House, there is perhaps no network better positioned to power her early launch than the women she will address Friday night in South Carolina: her sisters in Alpha Kappa Alpha Sorority, Incorporated — the nation’s oldest black sorority.Formed in 1908 by nine determined women at Howard who believed that college-educated black women could represent “the highest –more education, more enlightenment, and more of everything that the great mass of Negroes never had,” they set out with a credo to be “Supreme in service to all mankind.”That mission has stood the test of time as the sorority has expanded to some 300,000 women on college campuses across the country and several continents. Now one of their own is running for president. Harris will debut in South Carolina Friday night as a newly-minted presidential candidate when she addresses more than 3,000 of her Alpha Kappa Alpha sisters at the Pink Ice Gala in Columbia, an annual event that raises money for scholarships. These women could become the foot soldiers of a powerful voting bloc. CNN exit polling shows black women supported Democrats more than almost any other voting subgroup, helping drive Democratic wins in last year’s midterms. In Harris’ case, the sisters of Alpha Kappa Alpha could help her organize in states across the country and open up a unique pipeline for her fundraising appeals within their regions. “We’re talking about political power, and we have it,” said Lorri Saddler Rice who pledged AKA with Harris at Howard in 1986. “We have it and we’re going to leverage it. You’ll see it’s going to make a difference.”

At a tea last Saturday in the outskirts of Washington, DC, where 15 of Harris’ Alpha Kappa Alpha line sisters gathered for one of their many reunions, several sisters snapped their fingers during interviews with CNN when asked how quickly they expected the AKA network to spring into action nationally to help Harris.Harris’s core group of sisters — there were 38 of them who formed the “Spring of 1986 Ivy Leaf Pledge Club” — have supported each other at every stage of their careers, honoring the bond of sisterhood that they pledged to uphold for life.That was true in those early days on “The Yard” at Howard when they stepped in the circle in pink and green sweatshirts to show their spirit by singing AKA’s traditional songs.They have showed up in force for Harris at each of her milestones. At her recent book tour event at Washington’s Lisner Auditorium, they signaled their presence in the audience with their trademarked sound “Skee-Wee.”

Undated photo, Harris with her AKA line sisters”The sisterhood is still very real,” said Saddler Rice in an interview at the tea last Saturday, where she and her sisters wore their colors, topped with green-jeweled hats and pink satin fascinators. “There was a connection that was made back on the campus of our university that has transcended miles and years that brought us here today.”From a political standpoint, the Pink Ice Gala Friday night is a fitting rollout for Harris in a campaign where she hopes to galvanize the black vote, particularly black women who have been her party’s most reliable voters.Among the early states, Harris hopes South Carolina will serve as launch pad to build momentum and dominate the early primaries in the Southeast (along with her home turf of California and neighboring state of Nevada).The black vote makes up a huge portion of the Democratic electorate in many of the states that are scheduled to hold primaries in early 2020. In the 2016 Democratic primaries, for example, the black vote made up 61% of the electorate in South Carolina; 54% in Alabama; 51% in Georgia; 32% in Tennessee; and 32% in North Carolina, according to CNN exit polls.

Several former advisers to Barack Obama underscored Alpha Kappa Alpha’s influence by recalling to CNN how they convinced the exhausted 2008 candidate to stop by the Pink Ice Gala in January of that year, days before the Palmetto State’s primary.Facing Obama’s initial objections to the unscheduled stop after a long stretch of campaigning, his advisers asked him simply whether he wanted to win the primary. (Obama made the stop and went on to crush Hillary Clinton in the state’s primary by double-digits).For Harris’ line sisters from Howard University, this moment goes far deeper than a savvy stop on the political calendar. It is a natural extension of the legacy of their founding members, and the sisters who followed, championing political causes as varied as the advancement of women, voting rights, education, stopping famine and building schools in Africa.Though few of Harris’ line sisters from Howard predicted her run for president when they met her, they all recalled her drive and career focus. She was one who would join in the fun, but often break off, as one sister recalled, by saying “I’ve got to go study” as she trained her sights on law school.Darla Dash Washington, a Harris line sister who met her during their first year at Howard, remembers Harris bounding up to her in their French immersion class when she was running to be freshman class representative of the Liberal Arts Student Council.”She said can I have your vote?” recalled Dash Washington. “Then she just laughed. She had that belly laugh, where her whole body shakes. And I started laughing too.” (It was Harris’ first campaign, and she won.)At Howard, Harris has written that every signal “told students that we could be anything — that we were young, gifted, and black, and we shouldn’t let anything get in the way of our success.”

Photo of the 38 line sisters, taken in Spring 1986 on The Yard at Howard University. Harris is in the back row, fourth from the leftTheir pledge class decided their unique moniker would be “38 J.O.I.S.” which noted the number of sisters and stood for “Jewels of Iridescent Splendor.”

When Harris pledged during her senior year, she became number 15 among 38 sisters when they lined up by height. Their average GPA was 3.5. At least seven became lawyers; one is a sitting judge in Florida. Harris and some of her sisters protested Apartheid on the National Mall in Washington on weekends. To shine a spotlight on global hunger, their line also started a tradition that they called the “Stop Hunger Fast” where they fasted together over one weekend and got other people to sponsor them.In that first effort, they raised $10,000 for Africare and another local hunger organization. That’s an initiative that continues to this day, said Jill Louis, a Harris line sister from Dallas.”This was just a very high-powered group of people, and we clicked instantly because we were about purpose, and we all saw (AKA) as an avenue for that purpose,” said Louis, who is active in Democratic politics in her state (where she plans to help the California senator organize). “I think we believed that we could really impact the world.””We’re just a group that would dream things up and we believed we could make them happen,” Louis continued. “Kamala was definitely one of those people. She was always really funny, and she had a way of finding humor during high-pressure situations. … She was focused, but she could always find the humor.”