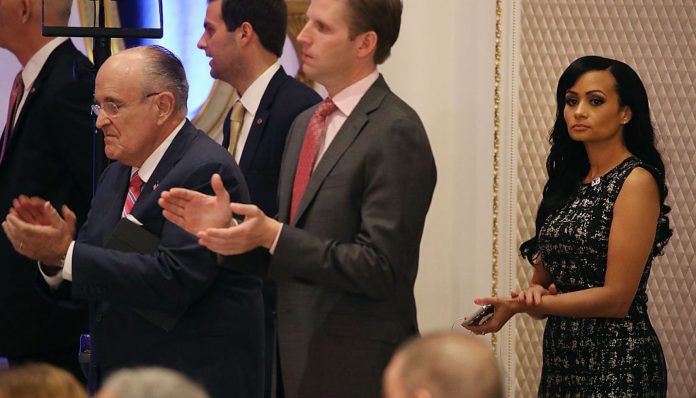 Donald Trump’s senior advisor for his 2020 presidential campaign rejects criticism that her boss is a racist. In fact, when Katrina Pierson was recently pressed to name at least one Black staffer in the West Wing, she replied by asking “How many Black people were in Abraham Lincoln’s West Wing?”

As reported by Newsweek, Pierson, who previously served as Trump’s 2016 national campaign spokesperson, had a heated conversation with MSNBC host Al Sharpton Saturday over the lack of Blacks in top administration positions.

“Historically, Republicans and Democrats have had major figures of the Black community in the West Wing as part of their senior staff and administration,” Sharpton said during the The Race Within the Race segment Saturday. “Who are the blacks in the West Wing under President Trump?”

“You mean those who took the job or those who were offered? Because those are two entirely different questions,” Pierson responded.

Despite the host and his guest shouting over each other, one thing was quite clear, Pierson was unable to provide one receipt to refute reports that Black staffers in Trump’s West Wing are like Santa Clause… they don’t exist.

Pierson even claimed that she herself had been offered Sarah Huckabee Sanders’ press secretary role but turned it down.

Sharpton then asked his other guest David Brock of Media Matters for America how Trump can “ask for Black votes” without hiring a single Black person to represent, but Pierson interjected, “there’s plenty of black people in the West Wing.”A Message From Nikon

The Nikon Z 6. Never Miss A Moment Of An Incredible Story.

“Well, I asked you to name them, and you started telling me, you turned down,” answered Sharpton.

“Because I’m not going to participate in the attempt to make this all about race. It is ridiculous. How many Black people were in Abraham Lincoln’s West Wing?,” she responded.

Adding, “Is Abraham Lincoln a racist because he didn’t have a black person in his White House? This is insane. This is an insane discussion.”

Pierson was previously dragged for filth on social media after she appeared in another race-related discussion on Fox & Friends back in 2017 and referred to slavery as “good history.”