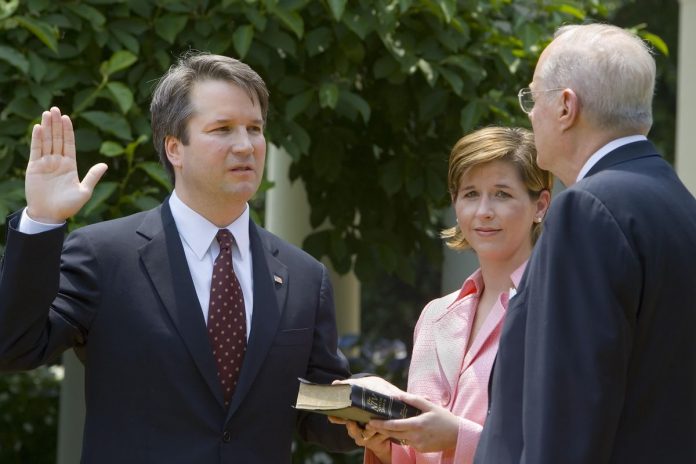 The first two cases that a Brett Kavanaugh Supreme Court was expected to hear have some serious implications for Black people living in America. They will also immediately thrust the former appellate judge under a much brighter spotlight than when he was accused of being a sexual predator during his Senate confirmation hearing over the past two weeks.

Considering everything we know about Kavanaugh and Black people — from his former law clerk who flashed a white supremacist hand signal during his hearing to his past history of having racist tendencies, to put it mildly — this week’s slate of cases could be seriously pivotal for African-Americans and other people of African descent living in the U.S.

And with the president making a case on Monday for the effectiveness of the unconstitutional practice of “stop and frisk,” the legal future of Black and brown people in America was further hanging in the balance before Kavanaugh could even officially take the bench.

First up for the Supreme Court on Tuesday was Stokeling v. United States, which centers on “Whether a state robbery offense that includes ‘as an element’ the common law requirement of overcoming ‘victim resistance’ is categorically a ‘violent felony’ under the Armed Career Criminal Act, 18 U.S.C. § 924(e)(2)(B)(i), when the offense has been specifically interpreted by state appellate courts to require only slight force to overcome resistance,” according to SCOTUS Blog.

The 1984 federal law imposes a 15-year minimum sentence for crimes with guns depending on the number of severity of prior convictions. At issue was which crimes under the law were “violent” versus “serious.” Given such a race-based discrepancy among people convicted of those types of crimes skewing heavily toward people of color, this case should be on the collective radar of Black America for obvious reasons.

Not to be outdone, the Supreme Court on the very next day was scheduled to hear Nielsen v. Preap, which was expected to yield a ruling on “Whether a criminal alien becomes exempt from mandatory detention under 8 U.S.C. § 1226(c) if, after the alien is released from criminal custody, the Department of Homeland Security does not take him into immigration custody immediately.”

A stunning number of undocumented immigrants in the country illegally and migrants detained at the border have recently been affected by the president’s controversial immigration policies, including and especially children being separated from their families as a result. Many of those people caught up in these policies have included people from Africa and Haiti and other Caribbean countries. While a federal court just ruled last week to protect hundreds of thousands of immigrants from deportation, a Supreme Court with Kavanaugh could drastically change all of that depending on this case. Of the roughly 11 million undocumented immigrants in America, just about 600,000 of them are Black, according to the most recent statistics by the Migration Policy Institute.

As if those two cases didn’t seem dire enough, Donald Trump, who nominated Kavanaugh, told a packed crowd Monday at the International Association of Chiefs of Police’s annual convention that the law enforcement tactic of “stop and frisk” — which in 2013 was declared unconstitutional by a federal court — should be restored on the books, citing Chicago as a primary example.

As a member of the D.C. Circuit Court, Kavanaugh dissented in a 2008 ruling that found “police violated a man’s Fourth Amendment rights by unzipping his jacket to search him without a warrant after a stop-and-frisk search did not yield results,” according to People for the American Way, a nonprofit organization that describes itself in part as defenders of “constitutional values under attack.”

Kavanaugh’s “dissent that the search was a reasonable continuation of the stop-and-frisk was, according to his fellow judges, ‘unsupportable on any plausible reading of the record.’”

Even worse, Kavanaugh claimed “that the police were free to unzip the jacket because it would help a robbery victim identify him by his clothing, which his fellow judges explained was based on ‘no reasonable grounds for belie[f].’”

It may not have been proven beyond a reasonable doubt that Kavanaugh was a heavy drinking sexual predator, but his predilection for responding with emotion over reason was certainly on full display. The realistic prospects of both of those factors colliding while he presides on the Supreme Court should be terrifying to America as a whole and especially to the Black people living here.