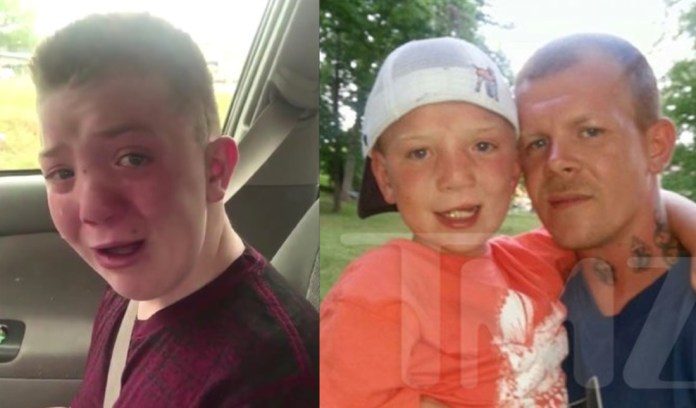 Keaton Jones went viral when he tearfully described the bullying he had been subject to in middle school, but it’s his family that has come under scrutiny ever since his mother was revealed to have posted about the Confederate flag.

Now, Keaton’s father has been revealed as Shawn White, a white supremacist who has been in Knox County Jail since May 2015. According to TMZ, he was arrested on an aggravated assault conviction and will be out next year.

White’s Facebook is filled with white supremacist memes, such as “HOLY F*** I LOVE BEING WHITE,” “Keep Calm and be White Pride,”  and “Aryan Pride.” A selfie also showed that he had “white pride” and “pure breed” tattooed on his stomach and chest, respectively. He also has “CWB” tattooed on his neck, which stands for “Crazy White Boy.”

It should be noted that it’s not clear what, if any, relationship Keaton has with his father. The last time White posted a picture with Keaton and his sister was in January of 2015, and there is no record of White marrying Kimberly Jones, Keaton’s mother.

But in the wake of the accusations of racism against Kimberly Jones, this kind of news certainly doesn’t look good, either.