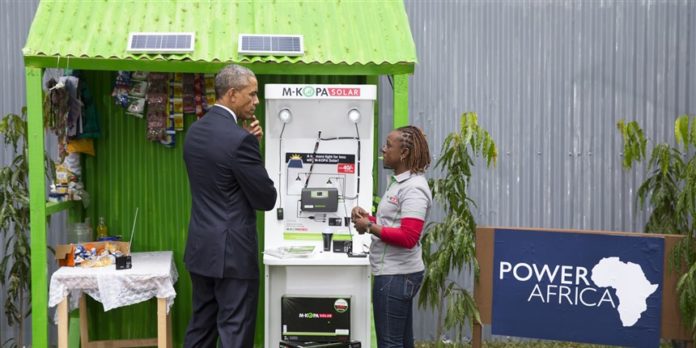 As Black History Month comes to a close, community leaders are hoping to continue sending a message to President Donald Trump about the countries he dismissed with his recent comments about Haiti and African nations.

While many were caught off guard by Trump’s reported commentsin January referring to Haiti and Africa nations as “shithole countries”, Ousmane Power-Greene, Associate Professor of History and Director of African Studies at Clark University in Worcester, Massachusetts said he was not. The President’s oblivion, he explained to NBC News, positions these places as useless to his “America First” agenda.

“It shows a complete misunderstanding of how important the continent of Africa is for U.S. development and U.S. business interests,” he said. To the President’s contrary, Power-Greene cites cobalt mining in the Democratic Republic of Congo as a major contribution to not only America, but also the world. The mineral is used in cell phone batteries and jet engines. Diamond extraction across the African continent provides “heavy engineering” according to Power-Greene. Firestone Natural Rubber Company, one of the largest rubber farms in the world, is based in Liberia. At least 70 percent of the world’scocoa beans used in chocolate come from West African nations.

The first official diplomatic relationship between an African country and the United States began in 1864 with Liberia, Power-Greene explained. Major diplomatic highlights since then include the United States spreading democracy in the region during the decolonization of dozens of African countries during the 1950’s and 1960’s. Feb. 28 marks the 70th anniversary of Accra Riots, which led to the fight for Ghana’s independence from Great Britain. Ghana’s location made it a huge player in the Trans-Atlantic slave trade. It is also home to Elmina Castle, a tourist attraction with a dark history of slavery that is visited by many Black Americans, especially during Black history month.

NBC News reached out to Ghana’s President Nana Akufo-Addo about the country’s relationship with the U.S., but he declined to comment.

The influence of the U.S. during apartheid in South Africa, is an influence Power-Greene said Nelson Mandela made as an instrumental moment for the two countries.

African countries and the U.S. have experienced positive interactions. Under former President George W. Bush’s administration, Africa saw the development of the “President’s Emergency Plan for AIDS Relief” and the “Africa Growth and Opportunity Act.” President Obama’s Administration created the Power Africa initiative, to make electricity more accessible in the region. In 2015, Obama became the first sitting American presidentto address the African Union. The U.S. was also influential in fighting the outbreak of the Ebola virus West African countries, including in Guinea, Liberia and Sierra Leone.

The African continent hasalso been a bedrock for political and economic shifts, including the recent resignation of former President Jacob Zuma of South Africa. Some African nations are apart of the fastest growing economies in the world and developing technologies.

Trump’s framework of “a one-way humanitarian engagement” perception of Africa and Haiti are the root of his lack of understanding on the global economy, according to Power-Greene.

“The question isn’t ‘America First’. It’s about how do we think critically about our interests in the context of thousands of moving parts,” he said.

Kelvin Brenya, 35, left Accra, Ghana at 14 years old. As co-founder of a minority-owned home care business in of Stamford, Connecticut, he said the portrayal of Africa is personal.

“It is the duty of Africans living in the U.S. to remind the President that Africa is a beautiful place and perhaps he should visit some parts of it one day.”

Haiti has been pushed into the spotlight where it has taken numerous diplomatic punches. While African countries received a letter from the president stating he “deeply respects” African people in the aftermath of the meeting and said he will send Secretary of State Rex Tillerson to the continent in March. It is unclear if the president sent a letter to Haiti.

During that same meeting, the president also singled out Haiti, according to sources, and asked, ‘Why do we need more Haitians, take them out.’

The Department of Homeland Security has made moves that would in fact remove a large sum of Haitians in the United States. In January, the Trump administration moved to bar Haitians from receiving farm and seasonal work visas that over 80 countries receive.

Haitian Ambassador to the United States, Paul Altidor said he plans to use all of this attention as “a platform to engage in a different dialogue, a positive dialogue,” that re-shifts the Haitian narrative in the eyes of the administration and the public.

This narrative, according to the ambassador, began in the 1700’s when Haitians fought along Americans during the American Revolutionary War. Another milestone came again during the Louisiana Purchase which was a direct result of the Haitian Revolution.

“Haiti made that happen for the Unites States. And from that moment on, the contribution of Haitians and Haitian-Americans in U.S. history has been well documented,” said Altidor.

Tensions were high between America and Haiti in accounting for donated funds after the devastating 2010 earthquake in the already struggling Caribbean country.

Roberte Exantus, 29, migrated to the States in 2006 and said she’s tired of downtrodden image branding her native land. “Pity means that instead of realizing what we are capable of doing you just feel as if poor little Haiti. We don’t need that. We’ve been through worse and came out. We don’t need anybody’s pity anymore, you can keep it,” she said.

It is the duty of Africans living in the U.S. to remind the President that Africa is a beautiful place and perhaps he should visit some parts of it one day.”

It is the duty of Africans living in the U.S. to remind the President that Africa is a beautiful place and perhaps he should visit some parts of it one day.”

To combat the shift in dialogue, Deputy Assistant Secretary of the Bureau of Western Hemisphere Affairs at the State Department Kenneth Merten, said the United States’ priority in Haiti are investments, building the Haitian police force and public health.

“The important thing is to look at what the United States has done not just now but through the years in terms of our partnership with Haiti, ” Merten stressed.

Black History Month, Power-Greene explains, is a time to challenge the President Trump’s marginalized narrative on African and Haiti while moving the conversation on social and contemporary movements forward into action as part of our daily lives.

“We need to learn about ordinary people who are central to making all sorts of social changes, specifically around the civil rights movement, the Anti-Apartheid struggle and of course our contemporary movement against mass incarceration and the Black Lives Matter movement.”