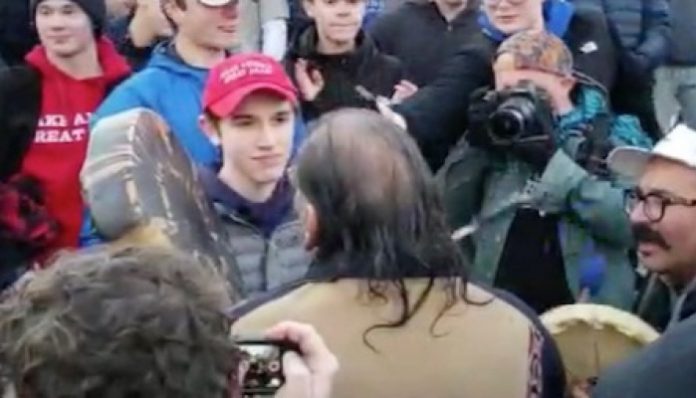 The Kentucky teen at the heart of an encounter last month with a Native American activist at the Lincoln Memorial in Washington is suing The Washington Post for $250 million, alleging the newspaper falsely labeled him a racist. His attorneys are threatening numerous other news organizations, including The Associated Press.

President Donald Trump cheered the lawsuit, tweeting Wednesday that “Covington student suing WAPO. Go get them Nick. Fake News!” The legal action, and possible future ones, comes at a time of intense scrutiny of Trump’s relationship with the press, which he has repeatedly labeled the “enemy of the people.” Supreme Court Justice Clarence Thomas this week suggested revisiting a cornerstone of modern press freedom, the 1964 New York Times Co. v. Sullivan case, which established knowing or reckless disregard falsity as a pre-requisite for libel actions by public officials, a standard later extended to libel actions by public figures as well.

In papers filed Tuesday in federal court in Kentucky, Nicholas Sandmann and his parents alleged that the Post had engaged in “targeting and bullying” and modern “McCarthyism.”

“The Post ignored basic journalist standards because it wanted to advance its well-known and easily documented, biased agenda against President Donald J. Trump … by impugning individuals perceived to be supporters,” according to the complaint.

In a statement Wednesday, the Post said it was “reviewing a copy of the lawsuit” and planned “to mount a vigorous defense.”

Sandmann’s attorneys also are threatening legal action against The Associated Press and other news organizations.  In a letter to the AP, dated Feb. 15, Atlanta-based attorney L. Lin Wood called on the news cooperative to “retract and correct” what his letter asserts are “defamatory statements.” Sandmann also provided his version of the events.

The Associated Press took great care to ensure its stories were measured and fair, reporting the facts of what transpired and adding details as they emerged, said spokeswoman Lauren Easton, adding that AP stands by its stories.

The actions of Sandmann and his Covington Catholic High School classmates have been intensely debated since video and photographs emerged of them wearing “Make America Great Again” hats and facing off against Omaha Nation elder Nathan Phillips.

Both Sandmann and Nathan Phillips say they were trying to defuse tensions that were rising among three groups on a day Washington hosted both the anti-abortion March for Life, attended by the Covington students, and the Indigenous Peoples March. But video of Sandmann and Phillips standing very close to each other , with Sandmann staring and at times smiling at Phillips as he sang and played a drum, gave some who watched it a different impression.

Interpretations changed over the days following the incident as witnesses released more cellphone video footage. Phillips had approached Sandmann, but well before that, both his group and Sandmann’s were confronted by a third group that appeared to be affiliated with the Black Hebrew Israelite movement.

Videos show members of the religious group yelling disparaging and profane insults at the students, some of whom shouted back. Video also shows the Native Americans being insulted by the small religious group. Sandmann’s legal team has released its own video , “Nick Sandmann: The Truth in 15 Minutes.” It shows scenes from the confrontation, clips from news coverage and interviews, and examples of harsh Tweets and comments aimed at Sandmann and his high school.

Phillips did not immediately return efforts to reach him for comment.

First Amendment lawyers contacted by the AP were hesitant to comment without reading the full legal complaint. Floyd Abrams, who worked on the landmark Pentagon Papers case of 1971, wrote in an email that “the press does get a good deal of leeway in voicing opinions about matters they have seen and are commenting on.”

One legal question might be whether Sandmann would be treated in court as a public or private figure. Abrams observed that “sometimes individuals involved in newsworthy events are treated as involuntary limited purpose public figures,” meaning they would have to meet a higher legal standard than would a private citizen.