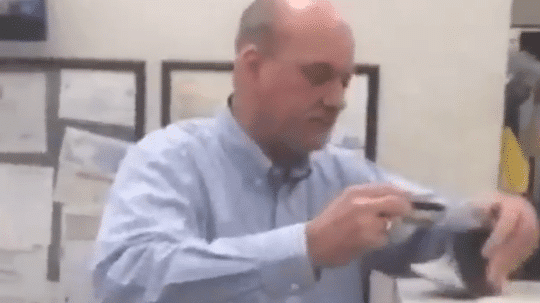 Kroger is apologizing after a Texas mother accused the grocery chain of racially profiling her son and nephews while they shopped at a store in Mesquite, a Dallas suburb.

Ukiah Swain said a Kroger manager called police on the youths — ages 15, 16, 19, and 20 — and accused them of stealing when they stopped in for snacks on Jan. 3. The teenagers produced receipts for the items they had purchased, but responding officers issued them a trespass warning anyway.

The warnings, which can be given at an officer’s or business’ discretion without reason, means the young men could be arrested and charged if they return to that Kroger location within a year.

Swain said she was floored by the incident and decided to confront the manager — on Facebook Live.She rushed into the store with her camera rolling after getting a frantic phone call from her son.

“I said, ‘Come again?’ And [the manager] said, ‘They looked like they could be shoplifters’ and he laughed,” she told NBC Dallas-Fort Worth.

Swain’s 16-year-old son, Zavion, said he got a similar response from the manager who, when asked what the teens had done, replied that “we’ve had problems with people like you before.”

Kroger addressed the incident in a statement Monday, saying it “did not live up to their values in this situation,” and have since apologized to Swain and her family. The grocer went on to say that the manager and associates involved have been removed from the store pending an investigation. It’s unclear if these employees were simply relocated to another Kroger, however.

Additionally, the company said it will hasten previously planned sensitivity training at all Dallas division stores and that it has reached out to the police department to rescind any complaints filed against the teens.

Mesquite Police confirmed that no charges have been filed in the incident.

“We strive to provide a welcoming environment and to show respect for all customers. We did not live up to our values in this situation,” the statement read. “We recognize these steps alone won’t change the broader systemic and cultural biases that plague our society, but we believe that together they demonstrate the seriousness with which we take these issues and our desire to be a part of the solution.”

Swain confirmed the company reached out to apologize but said no one has apologized directly to her son and nephews, who she said are still hurting over the incident. When asked how she wants the store to apologize, she told HuffPost, “The same way that they humiliated them — in person.”

“Don’t profile, and don’t automatically assume. Because that’s what y’all did,” she added.