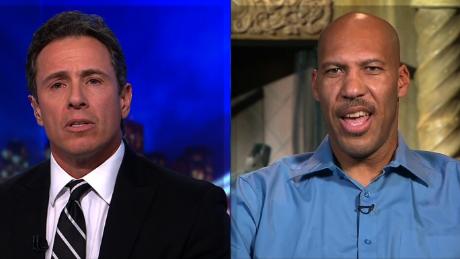 LaVar Ball said he’d like to thank a president — just not the one who resides in the White House.

The outspoken father of the LiAngelo Ball, one of three UCLA men’s basketball players arrested for shoplifting earlier this month in China, continued the back-and-forth with President Trump on CNN Tonight Monday, where Ball again questioned what Trump did to free the trio.

“Did he help the boys get out?” Ball said. ” I don’t know. If I was going to thank someone, I would probably thank (Chinese) President Xi (Jinping).”

In a disjointed interview despite the best efforts of host Chris Cuomo, Ball once again declined to thank Trump.

“If you help, you shouldn’t have to say anything,” says LaVar Ball, father of UCLA basketball player LiAngelo Ball, adding, “Let him do his political affairs and let me handle my son, and let’s just stay in our lane” https://t.co/CzyFZ2YTO1pic.twitter.com/1XiXEg6Pl4

LiAngelo Ball, Jalen Hill and Cody Riley — three freshmen UCLA players — were arrested by Chinese authorities after they allegedly stole merchandise from three different stores. The three were placed under house arrest at a hotel in Hangzhou during Trump’s 12-day Asian tour.

“Just because people say things, they’re supposed to be true? Like he stopped them from (serving) 10 years?” Ball said. “Maybe we were doing some talking with some other people before he even got there.”

Asked if he did more than Trump to get LiAngelo and the two others out of China, Ball responded, “yes.”

“I had some people that had boots on the ground that knew the situation when we first jumped on there,” Ball said. “I keep those people in mind.”

Ball also deflected when asked if he’s taking on Trump.

Monday’s interview follows days’ worth of exchanges between LaVar Ball and Trump. Last week, Trump questioned on Twitter whether the three players would thank him for helping gain their freedom last week — a few hours before they did at a news conference.

“Who?” LaVar Ball told ESPN. “What was he over there for? Don’t tell me nothing. Everybody wants to make it seem like he helped me out.”

Now that the three basketball players are out of China and saved from years in jail, LaVar Ball, the father of LiAngelo, is unaccepting of what I did for his son and that shoplifting is no big deal. I should have left them in jail!

Shoplifting is a very big deal in China, as it should be (5-10 years in jail), but not to father LaVar. Should have gotten his son out during my next trip to China instead. China told them why they were released. Very ungrateful!

“Why did he respond?” Ball asked during his interview on CNN Tonight, a show normally hosted by Don Lemon. “Why would I be in war with a guy (who is) the most powerful man in the world?”

While Ball didn’t outright thank Trump, he did offer up a festive message at the end of the interview that spanned more than 20 minutes — after he offered Cuomo a “swag” from the shoe brand he heads.

“Tell Donald Trump to have a great Thanksgiving,” Ball said.