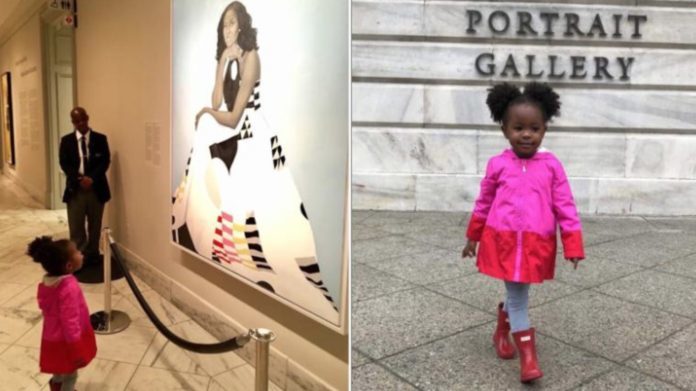 Just last month the official portraits of Former President Barack Obama and his wife Michelle Obama were unveiled at the National Portrait Gallery. The paintings were somewhat of a departure from the norm and people love it.

In her speech Michelle Obama said, “I’m also thinking about all of the young people, particularly girls and girls of color, who, in years ahead, will come to this place and they will look up and they will see an image of someone who looks like them hanging on the wall of this great American institution.”

Now we can see first hand what she was talking about.

A photo has surfaced of a little girl named Parker Curry, she is two-years-old, staring at the painting in what appears to be wonder. It was taken at the National Portrait Gallery in the days that followed the unveiling.

Ben Hines is the man who took the photo. He is 37-years-old and from North Carolina. He was in DC visiting his mother Donna. According to Hines, the little girl’s family were ahead of them in the lineup to see the painting of the former First Lady.

The little girl’s mother attempted to get the girl to turn around but she just wanted to stare at the painting.