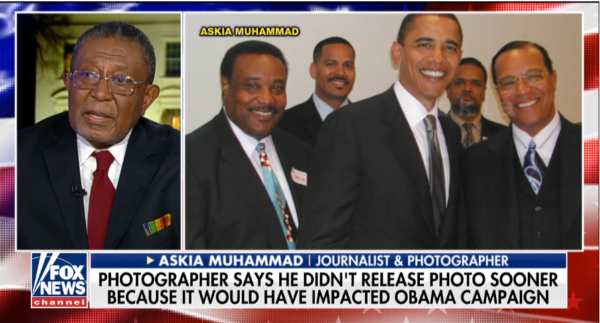 Nation of Islam leader Minister Louis Farrakhan is setting the record straight amid reports the Congressional Black Caucus tried to bury a 2005 photo of he and then-Illinois senator Barack Obama.

Farrakhan took to Twitter, Sunday, Jan. 28, to share a 2016 video explaining why he chose NOT to release the photo of him and the Black senator who would be elected president just three years later.

“You’ve never seen it,” Farrakhan said of the photo during a past speaking event in Atlanta, Ga. ” … It’s of me a Barack shaking hands [but ] I knew if I ever let that go out, they’d use that to hurt that brother. So, you never saw it.”

“I have always, by God’s grace, been able to see the bigger picture,” he wrote in a follow-up tweet.

The minister’s response comes after photojournalist Askia Muhammad released the top–secret photo last week, revealing that the Congressional Black Caucus pressured him to keep it under wraps all these years. Speaking to the Trice Edney News Wire, Muhammad said he believed it “absolutely would’ve made a difference” in the 2008 election had the photo been made public.

The photographer also appeared on Fox News’ “Tucker Carlson Tonight,” where he claimed the CBC reached out to him the same day he took the photo of the pair following a group meeting on Capitol Hill.

“A staff member from the black caucus called me and said ‘we have to have the picture back,’ and I was kind of taken aback,” he told Carlson. “… And we talked a couple of times on the phone after that, and I said ‘Okay, I will give the picture back to Minister Farrakhan’s chief of staff.’ ”

After giving the original copy to a member of Farrakhan’s staff, Muhammad said he kept a secret copy for himself because “it’s my art, and it’s my intellectual property.”

Like Farrakhan, however, Muhammad acknowledged that the minister’s reputation had the potential to hurt someone like Obama, who was at the time working “to win acceptance in the broad cross-section.” The young senator was also poised to make his bid for the U.S. presidency.

Watch the full interview below: