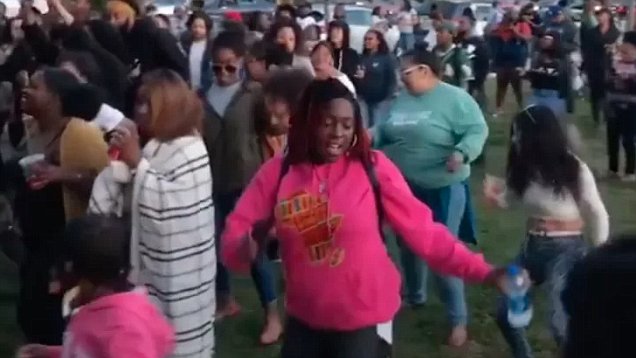 After one woman went low, this community went high.

Two weeks after a white woman called the police on a black family for setting up a charcoal grill in an Oakland, California, park, area residents threw a massive cookout in the same park, flooding the area with music, food, dancing and unity.

Videos taken at Lake Merritt on Thursday show people jumping rope, picnicking and even doing the electric slide while enjoying the public space.

The celebration followed an April 29 incident in which a woman ordered a black family grilling along the waterfront to pack up and leave because their charcoal grill was in a grilling area where charcoal wasn’t allowed. After the family refused to leave, the woman called the police and later accused one woman at the park of harassing her, video shows.

Oakland City Councilmember Lynette Gibson McElhaney was one of many who decried the incident as blatant racism.

“Police are not private security for any white person that’s offended by the presence of black folks in our public spaces,” she told HuffPost.

Police did not cite the family that was grilling, though they were detained and questioned for an hour over the incident, McElhaney said.

This is only one of the latest public examples of the cops being called on black people doing everyday things.

Last week, someone called the police on a Yale University student who was napping in her dormitory’s common area. Last month, two black men were arrested at a Starbucks cafe for “trespassing.” A granddaughter of Reggae legend Bob Marley also recently said police harassed her as she was leaving an Airbnb.