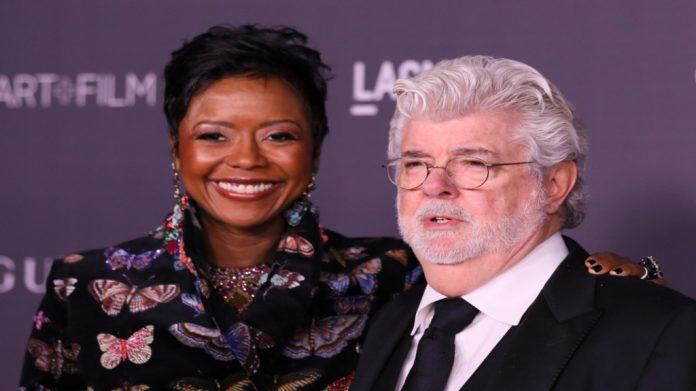 Well, this is a nice change! Starbucks Corporation has named Mellody Hobson their new Vice Chair. Some may just know Hobson as the wife of Star Wars creator George Lucas, but she is a bad-ass professional woman in her own right.

Hobson’s appointment comes after longtime chairman Howard Schultz announced yesterday that he would be stepping down on June 26. He will be replaced by Myron E. Ullman, the former chairman of J.C. Penney.

With Hobson as vice chair, the 49-year-old will be one of the few black Americans in history to hold such a role at a Fortune 500 company, according to Black Enterprise.

Starbucks Corporation has been in hot water since two black men were arrested in April for simply waiting two whole minutes for a friend to join them. The coffee giant apologized for the incident, and they implemented a mandatory one-day anti-bias training for all employees on May 30.

But the incident made us all question whether we should add Starbucks to the list of establishments to boycott. We’re not sure whether Hobson’s new role was a direct result of that incident, but I’m not mad at it.

Hobson currently serves as the president of Ariel Investments, LLC, the largest black American-owned money manager in the U.S. She rose up the ranks from intern to president at the Chicago-based company, and under her leadership, the firm was named No. 1 on the Black Enterprise Asset Managers list in 2003.

Not only is she smart and accomplished, she is well-liked. What a rare combination.

“She has a grace and graciousness about her that is singular,” Jeffrey Katzenberg, the former CEO of DreamWorks Animation, who had worked with Hobson, told Vanity Fair in 2015. “She is remarkably unique. She’s a stunning person. I get a little nervous talking about her because the words are so flowery. But it’s truly how I feel about her.”

Facebook COO Sheryl Sandberg said that one comment from Hobson inspired her to write her book Lean In.

“[Hobson] wanted to be unapologetically black and unapologetically a woman,” Sandberg said. “My life was altered by meeting her, and that’s not something I say lightly. She is such a big part of my path taken. I think she does that for everyone.”

From real-life colleagues to social media admirers, Hobson seems to be a choice for Vice Chair that everyone is here for, including us. As journalist Ed Gordon says, let’s be reminded that Starbucks also has a black woman COO – Rosalind Brewer. Let’s go Black Girl Magic!