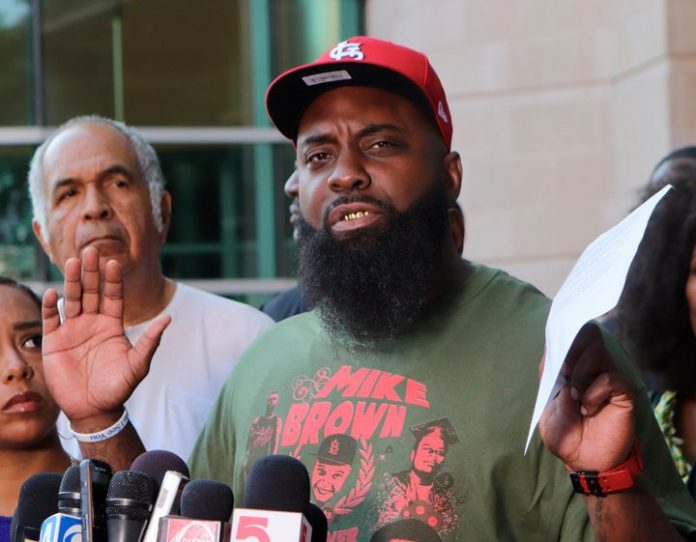 The father of Michael Brown, the unarmed black teen who was fatally shot by officer Darren Wilson in Ferguson, Missouri, is still pushing for justice in his son’s death.

Michael Brown Sr. sat down with CBS News for the fifth anniversary of the teen’s death, which occurred on Friday. Wilson, who’s white, did not face charges following his deadly use of force. REAL LIFE. REAL NEWS. REAL VOICES.Help us tell more of the stories that matter from voices that too often remain unheard.Subscribe Now

Brown Sr. told the outlet that he “would like for Wesley Bell to reopen the case,” referring to the first-term St. Louis County prosecutor. The father noted that he’s been in contact with the official.

In January, Bell replaced seven-term incumbent Bob McCulloch, who was heavily criticized for failing to bring charges in Brown’s case.

While Bell has not publicly commented on the possibility of reopening the case, he released a statement this week on the killing of Michael Brown.

“Our office is doing everything we can to understand the underlying issues that contributed to the tragic death of Michael Brown,” Bell said. “We are working every day with the community and law enforcement to implement policies and reforms that meaningfully address those issues, and help this community and this region heal.”

Then-Attorney General Eric Holder launched an investigation into Wilson’s actions back in 2014. The Justice Department later concluded that Wilson would not face federal civil rights charges, as it found that the officer’s use of deadly force against the unarmed teen could not be proven to be considered “objectively unreasonable.” Federal charges in the case were not appropriate, the DOJ found.

“There is no evidence upon which prosecutors can rely to disprove Wilson’s stated subjective belief that he feared for his safety,” the DOJ’s report read.

Brown Sr. doubled down on his plea while speaking to reporters on Friday outside the Buzz Westfall Justice Center in Clayton, Missouri. He said he is “demanding evidence to be reanalyzed, and accountability to follow,” according to the St. Louis Post-Dispatch.

“As a father, I vowed to protect my children, but on Aug. 9, 2014, that wasn’t the case,” he said. “I could not protect him that day and it breaks my heart. I will stand and fight until the day I die for justice.”

Racial justice organization Color of Change released a statement in support of Brown Sr.’s call. The group noted that this year’s anniversary serves as “a time to reflect on the progress we have made over the past five years, as well as a painful reminder of how far we have to go.”

“Michael’s death amplified a movement, from Black Lives Matter to progressive criminal justice reform returning to the national debate stage, to a growing prosecutor accountability movement, and even to deep reforms within Ferguson itself,” the statement read. “We hope he will stand with the Brown family and reopen this case.”