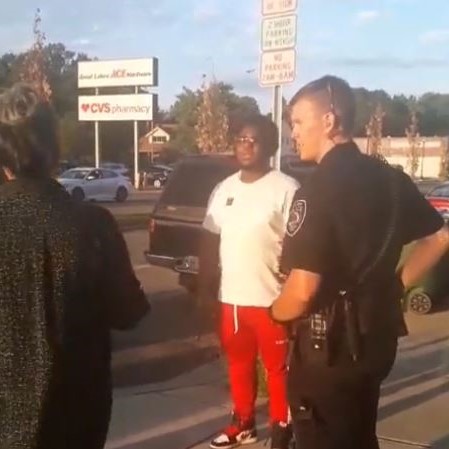 A Michigan police officer who stopped a Black man accused of “looking suspiciously” at a white woman has resigned.

Royal Oak Police Chief Corrigan O’Donohue announced Monday during a city commission meeting that Michael Pilcher, who had been on the force one year, had resigned.

“With the primary officer, we found past behavior that was inconsistent with his training and the standards and expectations of the Royal Oak Police Department,” O’Donohue said of Pilcher. “Last Friday, I personally reviewed his conduct with him.

“And when faced with the consequences of his actions, the officer resigned effective immediately.”

O’Donohue said when he was made aware of the incident he “initiated an internal investigation,” quickly determined what happened and met with Myers, his attorney and his mother.

He said although the resignation won’t end the department’s internal review, “this does appear to be an anomaly.”

“Most of the time, our officers go above and beyond what is required,” O’Donohue said. “With that said, they are human, and no organization is perfect.”

Pilcher stopped 20-year-old Devin Myers on August 13 and asked for his ID after a woman called 911 to report that he was “looking suspiciously” at her.

Inn Season restaurant manager Erin Frey told the Detroit Free Press Myers was actually trying to find a parking spot at the time and only noticed the woman because she looked like she was about to pull out of her parking space in the city’s downtown, near the Inn Season cafe.

When the first officer called to the scene arrived, he “handle it so aggressively right from the get-go” that Myers asked for a supervisor, Frey said.

He is shown on video explaining to the supervisor that if Frey, a white woman, was him in this situation, “you would have let her go 10 minutes ago.”

The Royal Oak Police Department has apologized to Myers in a statement.

“What should have been a very short encounter was extended when the officer involved insisted on getting Mr. Myers’ identification,” the department said in the statement. “The officer had no legal right to demand the identification and should have simply advised Mr. Myers why we were there and allowed him to go on his way.”

The police department also said the supervisor who responded to the incident “has been disciplined and every Royal Oak police supervisor has received additional training in procedural justice.”

Mayor Michael Fournier called the encounter “an unfortunate incident” during the commission meeting.

“Regrettably, we did not live up to our own professional standards. Our police department took immediate action,” he said. “We acknowledged our mistake, owned it, apologized for it and began a process to better understand what happened and why.

“This incident has not, will not, be swept under the rug.”