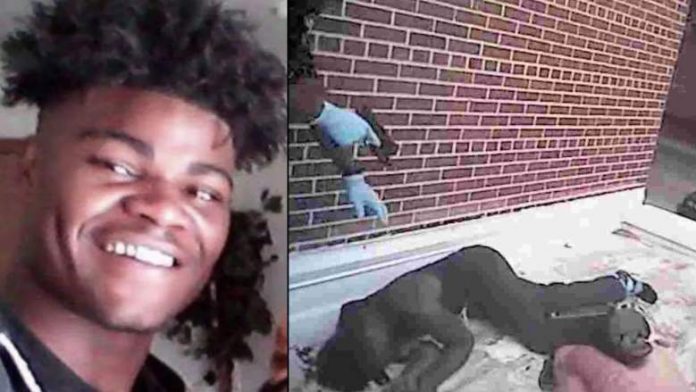 Milwaukee’s police department is once again under fire, this time over a recently released video that shows officers shooting an unarmed Black man named Jerry Smith Jr. last year, leaving him partially paralyzed. The evidence also revealed that the officers, who were cleared of wrongdoing, lied about the circumstances surrounding the shooting.

The city’s African-American community is exasperated.

“A lot of activists in Milwaukee have grown tired. It’s beyond tired, in not getting the response to calls for justice that we’re looking for. I believe a lot of folks are numb, but this deserves a huge response,” Markasa Tucker, director of Wisconsin Voices’ African American Roundtable, told NewsOne.

This incident comes against the backdrop of the police department’s history of brutality against African Americans, which was substantiated by an Urban Institute report in May 2018. Protests against unfair treatment at the hands of police reached a boiling point in 2014 after an officer shot Dontre Hamilton 14 times, killing the unarmed Black man on a park bench.

Police body camera footage, made public last week by Smith’s attorney, shows that the then-19-year-old had his hands raised when cops cornered him on a rooftop. Prosecutors concluded that the officers were justified in using deadly force because they believed that Smith was reaching for a gun behind an air conditioning unit on the roof. However, there was no gun.

The release of the video has ignited demands for justice and an independent investigation of the cops, as well as the department. Looking at what has happened in the past, many Black Milwaukee residents are doubtful that there will be justice at the end of the road.

“It’s really unfortunate that we expect cops not to be indicted. But when you see a video like this, though, it’s like, wait a minute. This is clear. A baby could see this man’s hands were free and that he didn’t have a gun. Yet and still, we get no indictments. It feels like the system is beyond corruption,” said Tucker, a longtime activist.

The African American Roundtable is a coalition of community leaders and organizations that work to improve civic engagement for and with the African-American community.

Tucker said she plans to meet with Smith’s family and their legal team to see how activists could support their efforts.

Attorney Walter Stern represents Smith in a civil rights case against the Milwaukee Police Department, according to Fox 6 News.

“We’re asking the U.S. Attorney’s office to now look at this video, make an independent decision or recommend to District Attorney (John) Chisholm to submit this to a grand jury,” said Daniel Storm, a forensic investigator working with Stern.

In the meantime, Tucker issued a call to action for residents to attend the upcoming Milwaukee Fire Police Commission meeting scheduled for Dec. 6. Folks must demand answers from the commission, which oversees the police department, she said.

“This has to stop!” Tucker exclaimed with emphasis.