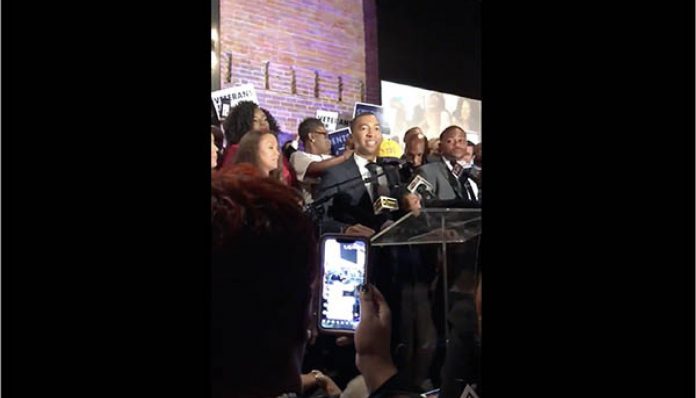 In a landmark victory, Steven Reed won Tuesday’s mayoral election in Montgomery, Alabama, becoming the historic city’s first African American mayor in its 200-year existence. He will be presiding over the birthplace of the civil rights movement.

In his victory speech, Reed stressed the need for unity.

With his win, Reed joined the esteemed likes of the rev. martin luther king jr. and rosa parks as pioneering black leaders who called montgomery home. because of those and other trailblazers, the city of montgomery has been a mainstay on the map of black history. that included the historic king-led march from selma to montgomery in order to register black voters as well as the Montgomery Bus Boycott, sparked by Parks’ refusal to give up her seat in the front of a bus to a white person. If that wasn’t enough, the city of Montgomery is about 60 percent Black.

Tuesday’s runoff election was forced after neither Reed nor his opponent local businessman David Woods got more than 50 percent of the vote. Local news outlet WSFA reported that Reed ran a campaign based in part on “increasing Montgomery’s police force, increasing support for schools, and bringing in more jobs that offer a livable wage.”

Reed’s victory also made him a part of a growing group of Black mayors of historic cities, including keisha lance bottoms in atlanta, lori lightfoot in chicago, London Breed of San Francisco, and so on and so on.

According to the Montgomery Advertiser, Reed secured the election by “gaining 32,918 votes to Woods’ 16,010 votes with 47 precincts of 47 precincts.”

Before the election results were announced, author and historian Richard Bailey told the Advertiser what a big deal it would be for Reed to win.

“This will be a historic day in Montgomery,” Bailey said. “For the first time, the people of this city, especially African Americans, will be able to say that we have someone in the mayor’s office who understands the pulse of the black community.”

Reed, a Morehouse College graduate and son of the longtime leader of the Black caucus of the Alabama Democratic Party, was expected to be sworn into his new post on Nov. 12.