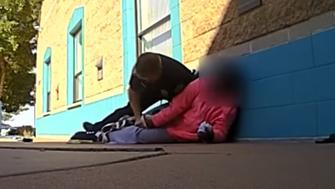 A New Mexico school resource officer has resigned following the release of disturbing body camera video showing his excessive use of force against an 11-year-old student.

“As the chief, it’s a brutal failure,” Police Chief Steve Hebbe told the outlet. “It’s a failure on our agency, and I can’t tell you how upsetting it is to me.”

Officials said Christensen was attempting to arrest a disruptive student when a struggle ensued. The department released an hour-long video of  the incident Monday, showing the officer tussling with the girl near the front entrance of the school in the northern New Mexico city.

The student, who has known behavioral issues, was initially accused of assaulting two school employees but later cleared by video evidence. The melee unfolded after the girl took “more milks than she was supposed to” from the school’s cafeteria, according to audio captured on Christensen’s lapel camera.

In the clip, Christensen is seen yanking the student’s arms behind her back as she repeatedly shouts for him to leave her alone. She resists, and the two engage in a back and forth as the officer struggles to place her in handcuffs. At one point, Christensen slams the student against a window, then onto the ground.

“Turn over! Turn over!” he barks, later ordering her to stop resisting.

“No! Get off of me,” the student is heard crying. “You’re hurting me!”

Christensen’s bodycam, which was knocked off during the struggle and retrieved by school employee, captured the cop pinning the 11-year-old’s head down with his elbow while restraining her with his full body weight. The employee, who propped the camera upright to continue recording the incident, is heard objecting to the officer’s use of force and noting that the girl “isn’t a threat to yourself or other at this point.”

“We’re past that!” Christensen yells.

The minutes-long scuffle ended with a school official intervening and the officer unable to cuff the student, who was later picked up by a parent.

“What we want officers to do is calm situations, and I think when we watch the video that isn’t what happened,” he added.

The police chief clarified that the girl was not handcuffed during the incident, but that she suffered a mild concussion, minor scrapes and shoulder pain following the incident.

An attorney for the girl’s family said they’re considering legal action related to the incident. In late August, the parents sent a notice of tort claim, which typically precedes a lawsuit, to both the Farmington Municipal Schools and the Farmington Police Department.

“While it is appreciated that the principal and vice-principal asked for the officer to stop, there is a question as to what the administrators could have done to prevent this from occurring at all,” attorney Mark Curnutt told KRQE News 13.

According to the outlet, the San Juan County District Attorney’s Office has declined to pursue criminal charges against Christensen.

The Farmington school district addressed the incident in the following statement:

Farmington Municipal Schools extends its apologies to the student and family involved in this unfortunate incident. FMS administration is reviewing this incident with the intent of putting into place procedures and practices to prevent another instance like this. The safety of all students entrusted to our care is among our highest priorities. We are committed to continuing our efforts in that endeavor.”