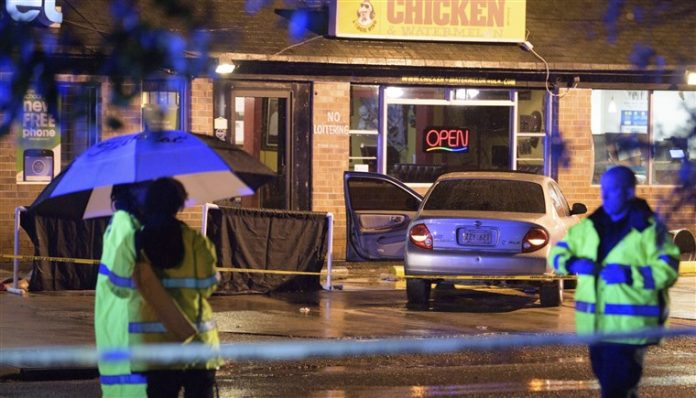 New Orleans police continue to search for two men wanted in connection to a mass shooting that killed three people and injured seven others at a daiquiri shop on Saturday night.

The deadly shooting that occurred at nightfall reignited calls to end violence and make it illegal for anyone under 21 to buy an assault weapon in the beleaguered city, which has seen 86 murders so far this year. As the murder rate surged to 51 in April, Dillard criminologist Ashraf Esmail called the numbers frightening, writes the New Orleans Times-Picayune.

“Two individuals clothed with what we believed to be hoods…approached from behind, right in front of the daiquiri shop right behind us and opened fire one with, we believe, a rifle and one with a handgun on the crowd, “New Orleans Police Chief Michael Harrison said of the shooting on Saturday, according to the New Orleans Times-Picayune, adding that the shooter appeared to “fire indiscriminately” into the crowd.

“This has to be personal,” Harrison said. “Firing indiscriminately into a crowd, shooting 10 people, killing three? It doesn’t get more personal.

“We believe they actually stood over one of the individuals and fired multiple rounds and then after that fled.”

The shooting occurred on South Claiborne Ave., about three miles outside of the French Quarter. The horrific scene included a woman screaming that she was going to kill the shooters who murdered her son.

New Orleans Mayor LaToya Cantrell said in a statement that “there is no place in New Orleans for this kind of violence.”

“There is no place in New Orleans for this kind of violence,” Cantrell said. “I speak for everyone in our City when I say we are disgusted, we are infuriated, and we have had more than enough. Three more lives — gone. It has to end.

“This happened near my neighborhood, on the edge of Broadmoor,” she added. “It’s unacceptable anywhere.”