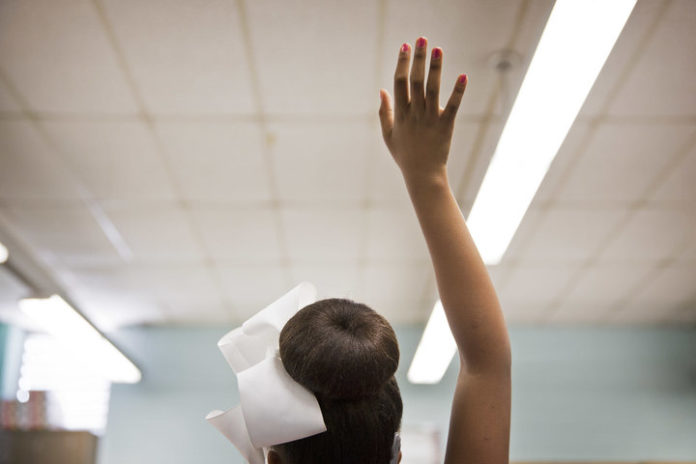 The state of education in New Orleans is constantly changing and churning. In many ways, this can be both positive and negative. For children, positive change is always good, of course, but there is a need for constants and plenty of consistency, as well. Are there some situations and schools that are functioning properly? Sure there are. But with an autonomous and parceled school structure like ours in the city, everyone seems to want to do their own thing instead of coming together collectively and deciding what works for kids on a grander scale.

HuffPost is hitting the road this fall to interview people about their hopes, dreams, fears ― and what it means to be American today.

The search for a quality education in New Orleans has been and remains a chore. It is a task parents and guardians face daily. It is a task that most of us have endured since coming home post-Katrina. And I am not sure when the work will end. In response to a school system perennially ranked among the lowest-performing in the nation, a large majority of our citizens opt out of the public school uncertainty and pursue private school enrollment instead (New Orleans continually ranks among the cities with the most children on private school rosters). But for parents who can’t afford that luxury, public, chartered education is where we land.

It feels as if we were selected to be the prototype, and there have been a lot of good intentions gone wrong.

The city, for example, worked to initiate the development of an all-charter district and implemented a central enrollment system for New Orleans, called “OneApp,” which was both well-intended and clumsily instituted. The city seems to lack an understanding of how the system actually functions and, further, explains it in ways that confuse both parents and students. They disregarded district schools and established a juggernaut transportation system that will cost millions, sending kids all over the entire city and siphoning funds from actual education. In this, they seemingly elected to vest the bulk of their worry into students without special needs initially and figure out workarounds for special needs students at a later date.

They started a bunch of duplicative education nonprofits to give the illusion they have the people’s interests in mind, and they used cliche phrases like “parent involvement” and “community stakeholders” to make the system look good.

They disenfranchised the local veteran educators while they injected a younger, less-experienced, less-costly educator pool, largely consisting of students right out of college who look to set up camp for a spell and then leave town. Unfortunately, the city has installed a great many educators who won’t resonate with the children they teach ― and definitely not their parents.

Yet with all of this, most parents have still been kept at bay and in the dark about what is really going on in their city, in their schools and with their children.

Our kids in New Orleans need to be more than just the prototype ― more than models to be studied, diagnosed and learned from.”

The OneApp system is a prime example ― a continued, interesting project that remains a tough sell to the public it serves, which is unfortunate, considering the system is responsible for placing every child within a school in Orleans parish, even preschool children.

Exceptions to the OneApp process are highly sought-after public schools that literally operate on a freelance basis. Their application processes prove to be cumbersome duties, complete with tests, deadlines and the reduction of our children to color-coded folders of demographic information. In some cases, still, the matter of whether your child receives adequate schooling boils down to who you know. And even then, there are only so many seats, meaning the unfortunate students who didn’t attain a place in the schools of their choice are sent back through OneApp computer algorithm model for placement.

Our kids in New Orleans need to be more than just the prototype ― more than models to be studied, diagnosed and learned from. Our children need educators to have extensive conversations about them and their educational outcomes. Those in power must engage in dialogue concerning our children’s wellbeing ― dialogue that includes the mental, emotional and physical aspects of our children’s lives. Our children deserve to have pinpointed, personal and strategic solutions to the problems that they will face in their lives ― solutions that are sparked by obtaining a great education and a quality education that starts with access.

And for too long our kids’ access has been denied.

We’re ready for that to be ours.