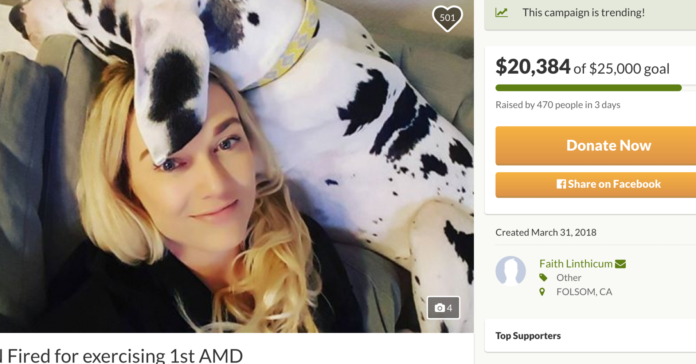 A California nurse who was fired from her job after saying Stephon Clark deserved to be killed by police has raised over $20,000 from a GoFundMe campaign to pay her bills.

Faith Linthicum launched her self-promoting fundraiser over the weekend, writing: “I’m a United States Military veteran who served as a medic, and then fulfilled my dream taking care of people by becoming a nurse. I was recently fired from my job as a nurse at Kaiser Permanente for exercising my First Amendment right to free speech. I am a proud supporter of this great Country, the First Amendment, the rule of law, and law enforcement.”

Linthicum said that she’s “not a hateful or discriminatory person” and that she was fired from her hospital job “without any investigation, and without giving me an opportunity to explain or defend myself.”

“I believe Kaiser Permanente violated my First Amendment right to free speech in order to protect themselves from the wrath of these activists,” she claimed.

Linthicum lost her job after she posted a comment on Facebook about the March 18 Sacramento police killing of Clark, 22, who was unarmed when two officers mistook his cellphone for a gun and shot him multiple times in his grandparents’ backyard.

“Yeah but he was running from the police jumping over fences and breaking in peoples houses … why run??!!! He deserved it for being stupid,” Linthicum wrote on Facebook, according to the Sacramento Bee.

Sacramento exploded in protests after the killing, with a march for justice, a fund set up for Clark’s children, and a massive funeral celebrating his life.

Kaiser Permanente said Linthicum’s Facebook post about Clark’s death was a “serious matter” and confirmed she no longer worked for the company. “Kaiser Permanente does not tolerate hate or discrimination … We are deeply saddened by the events associated with Stephon Clark’s death, and will continue to do our part to make sure the community is healthy, safe and inclusive,” an executive told the Sacramento Bee in a statement.

Linthicum says money she raises in her GoFundMe will “pay rent, buy food for myself and my two dogs (French Bulldog & Great Dane), or make my car payments/insurance.”

An anonymous person on Tuesday created a GoFundMe page titled: “Faith Linthicum Fired – Deserved It.” It seeks to raise $25,000, with the proceeds going to the Southern Poverty Law Center, a nonprofit specializing in civil rights  litigation and tracking of hate groups.

That fund, which by Wednesday had raised $1,000, features a statement that reads: “Please consider donating to a charity like the SPLC who fights hate instead of spreading it. I wouldn’t feel comfortable with this lady treating anyone because of her beliefs. If she doesn’t like the color of your skin, or anything else about you, will she let you die because you deserve it? She’s already raised her donation level from $3500 to  $25,000 because of the coverage from FOX News. Please help stop spreading the hate!”