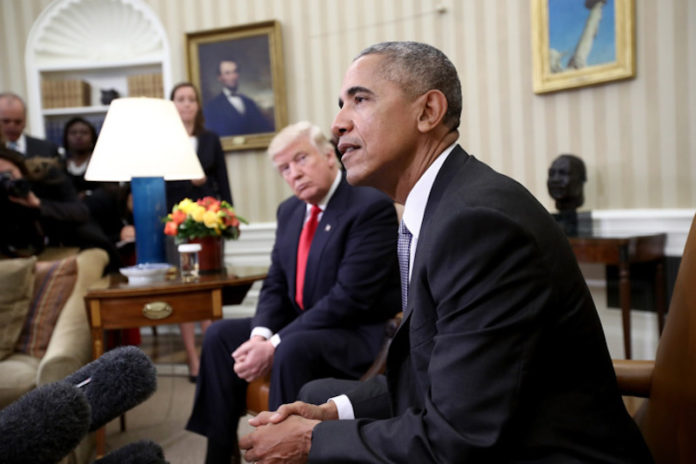 Former President Barack Obama has no time for the current president. Apparently, he hasn’t spoken to Trump since #45’s inauguration last year.

According to CNN, the last time they spoke, Trump and Obama were standing on the east front of the U.S. Capitol as an idling military helicopter stood nearby. Apparently, this isn’t standard and is the first time in decades that two successive presidents haven’t spoken to each other in 12 months after the latter has taken over the White House.

CNN noted that other presidents have been more cordial to one another: “Obama spoke on the phone with George W. Bush on February 27, 2009, to discuss his decision to withdraw some troops from Iraq and Bush called Bill Clinton on June 1, 2001, at a funeral in Boston. Clinton spoke with George H.W. Bush on September 15, 1993, at a White House ceremony for NAFTA and Bush Sr. spoke with Ronald Reagan — under whom he served as vice president — on April 26, 1989, during a meeting in Los Angeles.”

In fairness, Obama did leave the White House on a high note, leaving Trump a touching note on his way out.

“Congratulations on a remarkable run,” Obama wrote. “Millions have placed their hopes in you, and all of us, regardless of party, should hope for expanded prosperity and security during your tenure.”

Before and after the election, Trump has constantly attacked Obama, called him weak and ineffective, is dead set on tearing down every ounce of Obama’s legacy including the Paris Climate deal and Obamacare, and even ridiculously accused Obama of having his phones tapped at Trump Tower.

And that’s just for starters. Don’t get us started on that entire birther nonsense.

If he doesn’t want any advice from Obama, that’s on him. Because we all know Obama could teach him a serious lesson on empathy, humility and what being a true leader looks like.