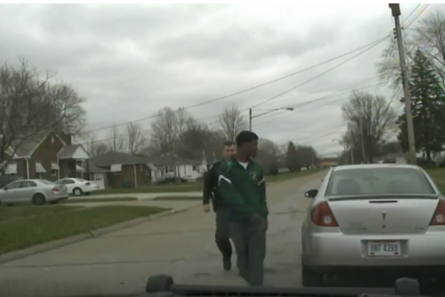 On April 16, in a town outside Cleveland, Ohio, officer John Kovach, Jr. pulled over his daughter’s boyfriend, 18-year-old Makai Coleman, who is Black, for no reason. In dash cam video, Coleman asks why he is being stopped and the officer says, “We’ll make sh*t up as we go.” He also attempts to escalate the situation by saying, “Get smart so I can do something to you, even more.” Fortunately, Coleman does not take the bait.

There were two other people visible in the car and the mother of one of them came out of her home to confront the officer because they were stopped outside of the house. Identified as  Gloria Morales by The Chronicle, she rightfully says he was using his badge for a personal issue. He then tells the two other people to get out of the car, which is when the cop sees his 18-year-old daughter hiding in the backseat. He tells her boyfriend to leave and violently pushes his daughter into the police car as she screams. The officer says he is taking her to the hospital because she said she would kill herself, which she denied. See the video below:

John Kovach Jr., who has been a police officer since 1992, has been fired. The Chroniclereports, “County Prosecutor Dennis Will said, ‘These actions are not acceptable for members of our Police Department and we felt it warranted immediate dismissal.’”

The Police Department’s union is appealing the decision, which, unfortunately, means he will probably get his job back.