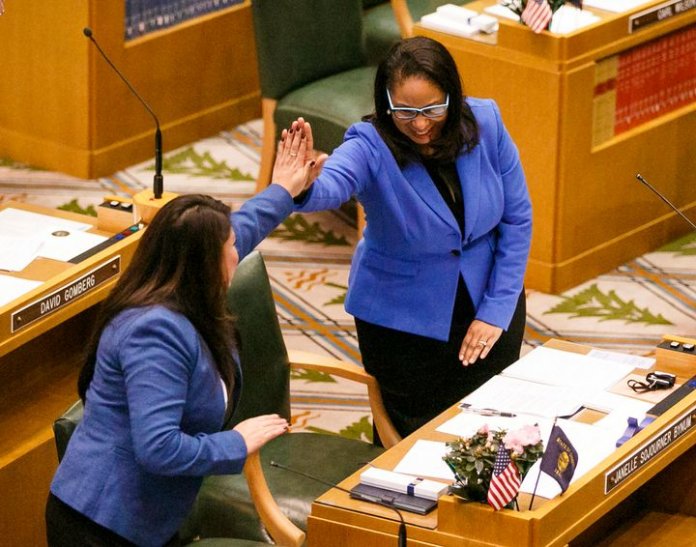 Oregon could soon allow victims of discrimination to sue over racially motivated 911 calls.

The state’s only three black state legislators introduced the bill as a response to various high-profile incidents of white people calling the police on black people simply going about their day ― incidents that often circulate on social media with the tag #livingwhileblack. The idea is to discourage people from making such calls, and to impose consequences, including a possible small claims court lawsuit, on those who do.REAL LIFE. REAL NEWS. REAL VOICES.Help us tell more of the stories that matter from voices that too often remain unheard.

The bill passed the state Senate in a near-unanimous vote on Monday and is expected to go to the desk of Gov. Kate Brown (D) soon.

State Rep. Janelle Bynum (D), one of the bill’s co-sponsors, recently experienced a racially motivated police call of her own. While Bynum was knocking on doors to canvas for reelection last July, a woman called the cops because she thought Bynum looked suspicious.

Bynum was able to speak to the woman and get an apology from her. She saw this as a chance for healing and redress, “but that wasn’t happening around the country,” Bynum told HuffPost.

In the past year, there have been viral videos of people calling the cops on black people engaged in innocuous activities like barbecuing and picking up trash. On Thursday, a black constituent told Bynum that she recently had to take a picture of her house to prove to a neighbor that she belonged in her own neighborhood. “I hate that I felt the need to prove myself ingrained in me,” the woman said, according to Bynum.

The proposal would make it a crime to have the police contact someone without reasonable concern of actual suspected criminal activity. Victims would be able to sue for up to $250 if they can prove law enforcement was summoned with racist intent to discriminate and damage a person’s reputation.

However, state Sen. Alan Olsen (R) thinks intent would be difficult to prove. Olsen is one of the few critics of the bill and was the only state senator to vote against it. He told The Associated Press the bill would make “our communities less safe” because people could be less inclined to report a crime.

Oregon state Sen. Lew Frederick (D), another co-sponsor of the proposal, disagrees. He told The Associated Press that if people suspect someone is truly committing a crime, they’ll still call the police. Racially motivated 911 calls exacerbate fear of police for people of color, he said.

Inspiration for the bill came from an op-ed for The Oregonian written by Erious Johnson, the state’s former lead civil rights attorney, that focused on the idea of “malicious summonings.”

“The real issue is about increasing public safety,” Bynum said. “People of color just want to live freely, and that’s an assertion that we need to continue making.”

The bill passed the state House in April, but must now be reapproved after the House makes a technical change.

“A transition has come to our country where we’re taking matters into our own hands,” Bynum said.