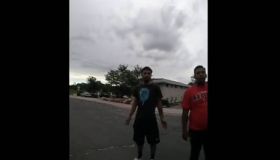 The video, released Thursday, comes two weeks after the 19-year-old was gunned down August 3 while running from police and follows calls from his family for an independent review of the incident.

According to an autopsy and footage from the shooting, Bailey was struck three times in the back before collapsing in the street. A bullet also hit the teen in the elbow. Officers were investigating a report of a robbery when they said Bailey reached for a weapon, prompting them to shoot.

The body camera video shows offficers questioning the teen and another man about the reported robbery. One of the cops instructs the men to keep their hands up so that another officer can search them for weapons.

“Hey guys, can I talk to you a sec?” one officer begins. “We have a report of two people, similar descriptions, possibly having a gun … so don’t reach for your waists. We’re gonna just check and make sure that you don’t have a weapon.”

A stoic Bailey suddenly makes a run for it and is seen sprinting with his hands near his waistband. An officer is heard yelling “hands up!” three times before opening fire on the young man. Bailey collapses, after which police run over and attempt to render aid.

In the video, an officer kneeling at Bailey’s side pulls at something in his shorts, struggling to free it. Blood is seen coming from his wounds.

“He’s got a gun in his pants,” another officer says as the kneeling officer uses a blade to cut the teen’s shorts and retrieve the weapon.

Lawyers for the Bailey family said relatives were “devastated” after viewing the “wholly unjustified killing of their family member.” Darold Killmer, another lawyer for the family, accused officers of using excessive force and noted that Bailey, 19, was “doing everything in his power … to get away.”

“He did not have a weapon in his hand and had not shown any weapon when he was shot in the back and killed,” Killmer said. “The police appear to argue that they shot Mr. Bailey because they feared he was going for a gun at the time. We think the video shows otherwise.”

According to the coroner’s report, shots to the young man’s back “collectively perforated the heart, left lung, diaphragm, and penetrated the spleen, resulting in massive blood loss and his subsequent death.” Family attorney Mari Newman likened the incident to an “execution.”

The shooting was investigated by the El Paso County Sheriff’s Office and has been turned over to the district attorney’s office to determine if charges will be filed against the cops involved. However, Bailey’s family has asked that an independent special prosecutor handle the inquiry, citing conflicts between the sheriff’s and prosecutor’s offices that could affect the investigation.

Bailey’s death sparked several protests in Colorado Springs, and comes at a time when police departments are facing intense scrutiny over the killings of African-American men. Mayor John Suthers called for calm last week as police continued their review of the deadly incident.

Colorado Springs Police have not commented on the video.

Bailley’s funeral and burial services are scheduled for Friday.

Watch more in the video below.
*WARNING: This video contains graphic content and may be upsetting to some viewers.