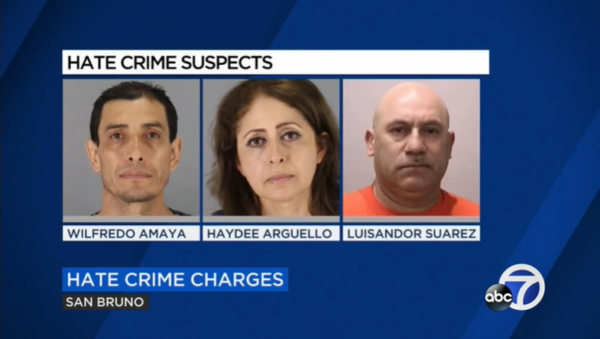 The parents of a 15-year-old California girl are facing hate crime charges after police say they kidnapped and assaulted a teen boy they found hiding in the daughter’s bedroom closet.

The boy, who reported the alleged assault to police last week, said the girl’s parents also hurled racial slurs at him during the incident and even restrained him using a rope as they attacked him repeatedly. The trio is now behinds bars on multiple felony charges including committing a hate crime, kidnapping, and assault with a deadly weapon and criminal threats.

The incident unfolded as the unnamed 17-year-old victim was visiting his girlfriend’s San Bruno home in the wee hours of Thursday morning when the girl’s parents arrived around 2:30 a.m. When they discovered him in the girl’s room, they “became irate and began assaulting him,” according to police.

The young man said he believes race was “a motivating factor” in the brutal attack, noting how the n-word was used against him. All three suspects are of Latino descent.

The teen girl’s older sisters, Belkys Gomez and Katherine Gomez, said their parents thought the boy was an intruder and acted in self-defense when he tried attacking them.

“They were so scared because they found someone in the closet,” Belkys Gomez told KGO. “They jumped because everyone was sleeping and this guy started kicking my step-father and trying to kill him.”

Katherine Gomez added: “He punched [my mom] and then my stepdad, of course, is not going to let anyone hit his wife. They tried to stop him and he was acting very violent, so they grabbed a rope to try to tie him down and ask him why he was at the house.”

Both denied that the assault was racially motivated.

Neighbor Jorge Flores, who lives several houses down from where the incident occurred, told the outlet he could hear the victim crying in pain.

All three suspects remain at the San Mateo County jail without bail.

According to KGO, the parents’ 15-year-old daughter is now in the care of Child Protective Services.