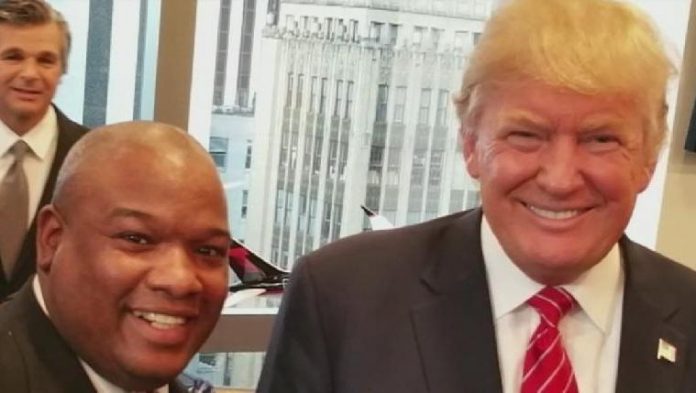 Pastor Mark Burns has been passionately supporting Trump for a couple years.

During the conference that showed a video of Trump shooting and killing members of the media, Pastor Mark Burns was in attendance. According to audio from ProPublica and WNYC, Burns told the crowd several times that “we’ve come to declare war” and if anybody was “ready to go to war for Donald J. Trump, this nation?” The audience cheered him on. You can hear the disturbing audio here.

In case you missed it, in the disturbing video, Trump’s face is superimposed on an actor’s body who is shown brutally shooting, stabbing and assaulting digitally manipulated images of news outlets like CNN, ABC, and HuffPost. One of the most disturbing parts comes when Trump is depicted violently attacking some of his most staunch political opponents.

In one instance, the Trump character repeatedly punches someone with Rep. Maxine Waters‘ face superimposed while another character with the word “JAIL” superimposed throws the Waters figure out of a window. In another instance, a Barack Obama character gets his neck snapped while being thrown against a wooden facade.

Another disturbing moment comes when a character with a Black Lives Matter logo superimposed gets grabbed by the neck and shot in the head. The mass shooting and violence in the video was set in a religious house of worship deemed the “Church of Fake News.” The video seems to have been edited from a church massacre scene from the 2014 dark comedy movie “Kingsman: The Secret Service.” You can watch the graphic video for yourself below.

The clip was screened at a three-day conference organized by a pro-Trump group called American Priority at the Trump National Doral Miami resort, according to The New York Times. Trump’s son Donald Trump Jr., his former spokeswomen Sarah Huckabee Sanders and Florida Gov. Ron DeSantis were scheduled to speak there.

This is clearly a new low.