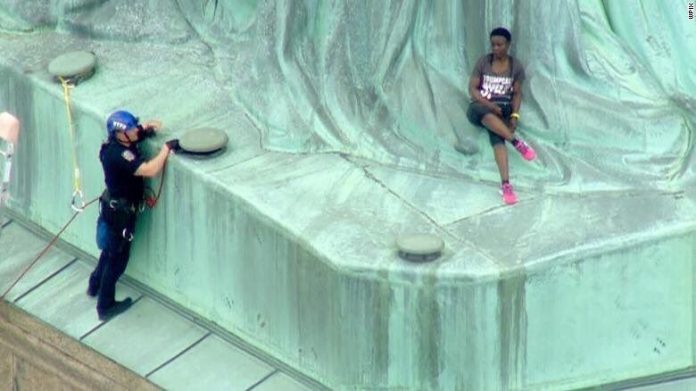 Therese Patricia Okoumou got a slow clap around the world when she scaled the Statue of Liberty on July 4. In a now famous photo, she sat with her legs crossed at the base of Lady Liberty while a police rescuer was just a few feet away from her.

Okoumou was there for approximately two hours before she was apprehended. The 44-year-old was protesting Trump’s racist immigrant policy, which included the separation policy that has kept thousands of children detained apart from their parents.

The Congo native, who now resides in New York City’s Staten Island, on Monday was found guilty of multiple misdemeanors. According to Pix 11, she “was found guilty of three misdemeanor charges: trespassing, disorderly conduct and interfering with government functions.” She was scheduled to be sentenced March 5, 2019, and faces up to six months in jail for each charge.

“The act of climbing the base of the Statue of Liberty went well beyond peaceable protest, a right we certainly respect. It was a crime that put people at grave risk,” U.S. Attorney Geoffrey S. Berman said during a press conference Monday.

Okoumou seemed optimistic, if not resolute, following being found guilty.

“I’m hoping that this is an opportunity for me not only to talk to the judge but to the whole world as I did on the 4th of July to remind everyone that we have children in cages and there are still a lot of children in cages,” she said at a press conference Monday. “No child belongs in a cage. Period.”

Hopefully, Okoumou will serve no time and continue her activism, which goes beyond immigration. In September, she participated in the March For Black Women and joined others in calling for a renewal of the Violence Against Women Act, which former president Bill Clinton signed into law in 1994. Additionally, Okoumou has advocated for gun control and supported the Marjory Stoneman Douglas high school students activists.